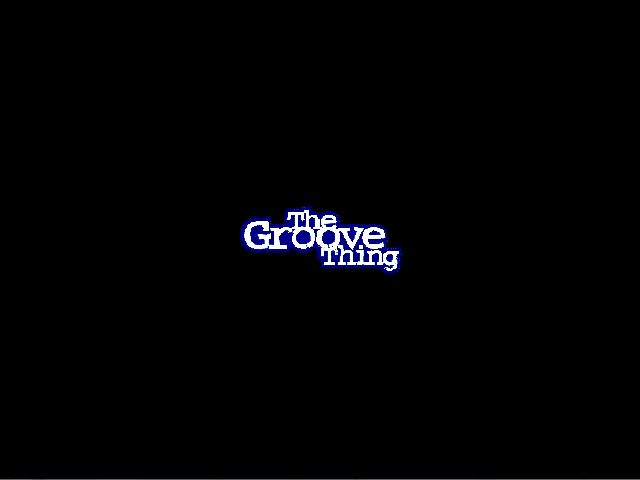 When visiting the mall as a kid, I’d usually stop by Spencer’s, a novelty store that specialized in crass and raunchy joke gifts. Among their usual fart-related T-shirts, the store always kept the back aisle dimly lit and well-stocked with plasma balls, blacklights, lava lamps, strobes, and other trippy decor. In retrospect, it was clearly intended for stoners, but I was too innocent to get that. It just felt cool. And I liked the glowy things.

Like a naive kid’s version of the back of Spencer’s, The Groove Thing is an in-your-face light show for its own sake. This kaleidoscopic art-and-music software would probably pair well with any sort of substance enhancement but is too earnest for that. It’s here to put you in a trance with the only tools in its bag, colors and patterns.The Groove Thing is mostly a hands-off program. It continually draws hypnotic shapes on the screen based on settings you choose from a psychedelic toolbar at the bottom of the screen. You can select one of base styles, as well has a handful of size and symmetry options and color schemes. Should you want to sit back and watch, you can also toggle a mode that automatically changes these setting every few seconds.

All these preferences are dramatically oversold; the packaging calls line thickness “chang[ing] the cosmic weight of your lines.” Suffice to say, your options don’t match that hyperbole, but the kaleidoscope patterns at least have some variety. 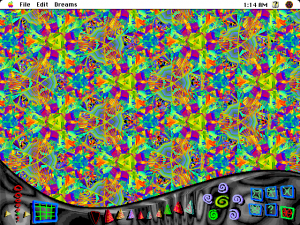 Trippy to look at, trippy to use

Drawings in The Groove Thing constantly change and cycle colors, so screenshots don’t quite capture the program’s full look and feel. The effect is mesmerizing for a bit, but it works best as background noise rather than as a main attraction. Luckily, you can shrink the window to fit on the side of the screen, making it a nice companion if you had some word-processing to do. You can always enlarge it too if you want to turn your computer into an art display for… your choice of activity.

(The program also includes an audio feature that moves the kaleidoscope in time with music you play and noises that come through your microphone. You can also play thematic sound effects with your keyboard. For hardware reasons, I was not able to try these features, but they likely add interactivity that’s more engrossing.)

Because of its limited functionality and plaything nature, this would probably be a disposable browser toy if released today. The Groove Thing justifies existing as a full application entirely through flair. The interface is impractically vibrant, with neon spirals, curves, and triangles substituted for any buttons or straight lines that a conventional program might use. Every pixel and sound screams “alternative 90s pop art,” a fun of-the-moment stylistic quality. And although it’s not part of the software, The Groove Thing comes in a striking three-dimensional pentagon-shaped box. Where others might have produced a kaleidoscope widget, Big Top Productions made a kaleidoscopic art object.

That’s still a lot of pomp for a program that draws rainbow squiggles everywhere. The Groove Thing is not quite the life-changing, sensual experience it promises. Simple or otherwise, it does go further with its premise than any kaleidoscope program rightfully should try, and its naked enthusiasm rubs off. Watch the pretty lights with it for a while.

The Groove Thing began as a non-verbal software toy for schools, but Big Top Productions chose to market it publicly after positive responses from a wider audience. The program uses algorithms by Kaleidoscapes artist Sara Frucht, and the developers separately sold a screensaver set based on this code called “Sara’s Geometric Dreams.”

I don’t usually offer downloads for the games and software I write about, but I’ve made an exception for The Groove Thing. This is an unusually difficult-to-find program, and as best as I can tell, it is nearly undocumented online. My disc might be one of the last surviving copies. In the interest of preservation, I’ve uploaded an .iso of The Groove Thing to the Internet Archive’s CD-ROM Software Library collection. Big thanks to Internet Archive’s Jason Scott for letting me contribute.

Please remember that this is software for classic Mac OS, so it won’t work on most computers.