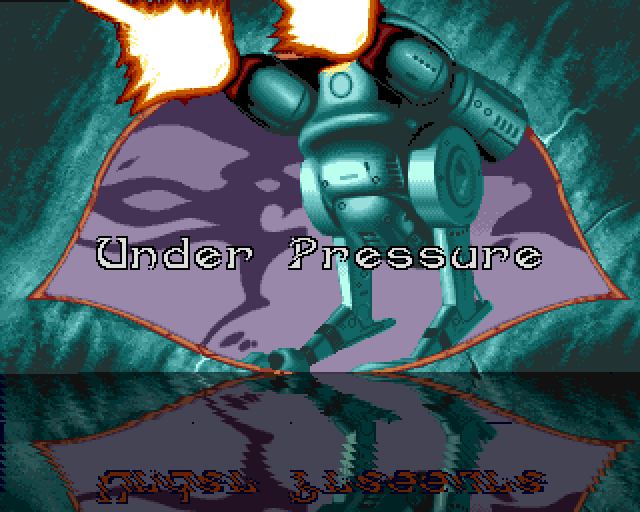 The characters in Under Pressure are humongous. That leads to a whole slew of problems. You control a walking military robot that occupies almost half the vertical space on the screen, and with so little room, it can be difficult to tell where you’re going, especially what’s above or below you. When a single alien monster appears, the game slows down significantly as it puts all the processing power of the Amiga platform into these huge, unoptimized character graphics.

I could go on about the performance and design issues in Under Pressure, but the truth is that the game wasn’t meant to turn out this way, and the developers knew it. It wasn’t supposed to happen at all. Instead, it’s a symptom of how unrelenting the game industry can be for companies that live project-to-project.

Under Pressure doesn’t give credit to the company that developed the game, because by the time it was released, they were out of business. It was actually the last game by Eldritch the Cat, a British company that had worked on a handful of Amiga titles over the years. I reached out to Steve Wetherill, the co-founder of Eldritch the Cat and co-creator of Under Pressure, and he explained the dire circumstances under which this game was produced. 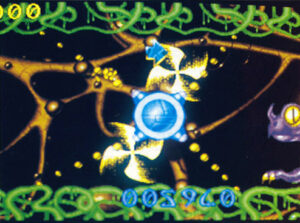 Tentacle was going to be the next big game from Eldritch the Cat.2

In 1991, Eldritch the Cat had a lot on their plate. They were in the middle of working on a couple new titles for an assortment of different publishers, like something called FLOPS: Futile League of Pathetic Superheroes.1 Their biggest project coming up was Tentacle, a bizarre action game where you control a spaceship with tentacle arms, which had gotten a bit of buzz in the press because of its extravagant visuals.2,3 Eldritch was a fairly small studio, and they were keeping busy.

Then suddenly, they got the rug pulled out from underneath them. According to Wetherill, a major game publisher in the United Kingdom canceled their contract with Eldritch the Cat, throwing them into financial jeopardy. Wetherill didn’t say which publisher backed out, but whoever it was, the loss of their contract was apparently one of several problems that landed on Eldritch at the same time. With no options left to keep the studio afloat, Wetherill and his business partner Mark McCubbin were forced to shut down the company, leaving FLOPS and Tentacle incomplete.1 It’s an unfortunate example of how volatile the game industry can be.

But they weren’t able to close down just yet. Eldritch the Cat had a contractual obligation to produce one more game for the publisher Electronic Zoo, even with their incredibly limited resources. That’s why they made Under Pressure.

Wetherill describes it as a project that was “developed under extreme time pressure and under an extremely low budget.” In order to get the game done as quickly and cheaply as possible, they cobbled it together using whatever the studio had available.1 During the production of Tentacle, Mark McCubbin had developed a custom game engine framework called OCCAI (a play on the Scottish phrase “och aye”), which could help speed up the development process,2 so they used that. Plus, they had plenty of assets leftover from Tentacle, so they reused some of those as well.1 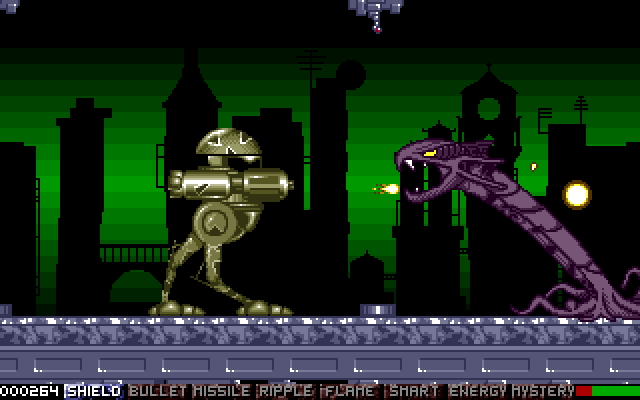 A preview of Tentacle from The One for Amiga Games magazine mentions that McCubbin wanted to make the player “massive,” because he thought it looked cool compared to smaller characters in other games who “looked a bit weedy.”2 Even though the two games have different characters, it’s very possible that the idea of huge character designs was hurriedly carried over into Under Pressure too.

Given how hastily the game was produced, the developers didn’t have a chance to second-guess their design choices or go back to fix anything. There was enough time to address major problems, like game crashes, but that was it. Maybe they realized there were performance or control issues, but they couldn’t do anything about it with the scarce time and money on hand. “[T]he major motivation for the entire game was the need to ship the game quickly. That’s really all there is to it,” Wetherill said. “Not that we set out to do a bad job, and we worked really hard to get the game done to the best of our ability in the time we had.”1

The game was completed in only three months at a personal financial loss to Wetherill and McCubbin in order to fulfill the studio’s obligations.1,4 And maybe that’s the most that can be said: it was done. “Under Pressure was not a shining moment in the history of Eldritch the Cat,” Wetherill acknowledged. “It’s not a game I am proud of, and I am hardly going to defend any of the design decisions.”1

So yes, Under Pressure was made under pressure. I don’t think it was intentionally named after that, but the title works either way. Jokes aside, it really does explain why the game has so many outstanding issues with level design, character design, and just about everything else. The development team did what they could under extreme constraints when their studio shouldn’t have even been operating.

I don’t think Under Pressure is notably worse than some of the other most rigid action games for computers in the early 90s. It is, however, an instructive failure. It’s easy to criticize a wonky game, but the problems with Under Pressure were the product of a precarious business model that forced a small, cash-strapped developer to make a bad game rather than nothing at all.

After Eldritch the Cat shut down, Tentacle quietly disappeared, but it wasn’t clear to the public that the game had been shelved. A year later, Amiga Power followed up with the game’s original publisher, Millennium, to learn what happened. Millennium producer Ian Saunter confirmed that they’d canceled Tentacle – maybe this was some of the bad news Eldritch had gotten in 1991, or it even could have been their big lost contract – because the game was running behind schedule. “Bits and pieces eventually surfaced in another game from another publisher, but that’s about all I can tell you,” Saunter added cryptically.5 Years later, mystery solved!

In addition to everything else that was in the works when they closed down, Eldritch had another game in development using the OCCAI engine, a port of Myth: History in the Making for the Amiga and Atari ST. The Amiga version did eventually see the light of day, although Eldritch went uncredited again; Wetherill says it was finished up by a former employee, Dave Colclough.1