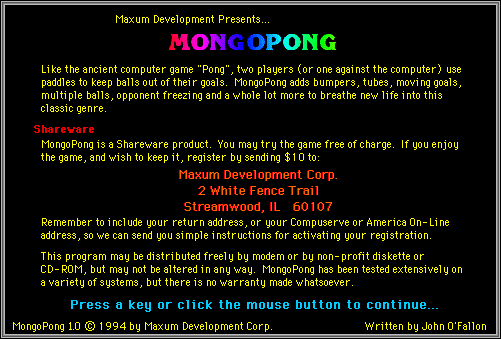 One of the usual templates for shareware and freeware games was to take a simple game concept and pump it as full of extra features as possible. That’s what happened with games like Heroes, a souped-up version of Snake, or Ambrosia Software titles like Barrack. They’re still familiar games, but they’re chocked full of bells and whistles and pushed in an aesthetically extreme direction.

MongoPong by John O’Fallon is another familiar game idea pushed as far as it will take. Like the name suggests, it’s a new version of Pong that’s overloaded it with moving objects and other new options. (In other words, it’s “mongo.”) But surprisingly, compared to the super-duper revamps of other games, it doesn’t take too much extra for Pong to get out of control.

There’s a lot of new features in MongoPong. Rather than guarding an entire side of the screen like the original Pong, you’re blocking a goal, which moves back and forth. The playing field has obstacles on it now, like speed bumps, barriers, and “gravity holes” that bend the direction of the ball. And by default, the game is much more frenetic than regular Pong, because it puts six balls on the screen at once. 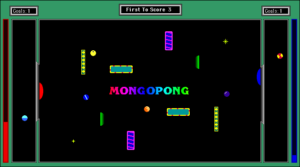 The difference is that compared to Snake or Jezzball or Centipede or whatever other games got revamped, Pong is a reactive game. You can’t actually do much in Pong; you’re just responding to the balls getting bounced back at you. When there’s multiple balls in play at once, it’s difficult to focus on anything else except hitting them back. It doesn’t matter whether you’re playing on the stage The Kitchen Sink or Kitchen Sink II, because whatever combination of tubes and bumpers are strewn across the stage, you’ll be kept too busy juggling balls to notice. At a certain point, it’s all noise, and MongoPong demonstrates that you can hit that point pretty easily.

It doesn’t have to be so hectic if you don’t want it to be. MongoPong lets you toggle or adjust some of its new features. You can have up to ten balls at once if you want, or as few as one ball. In a game full of additions, the most welcome feature is being able to dial it down, which comes across like an acknowledgement that it went too far.

The game doesn’t give you full control of every option, but there’s enough settings that you can hone in what you think an ideally over-the-top version of Pong would be like. Maybe 50% mongo is more like it.