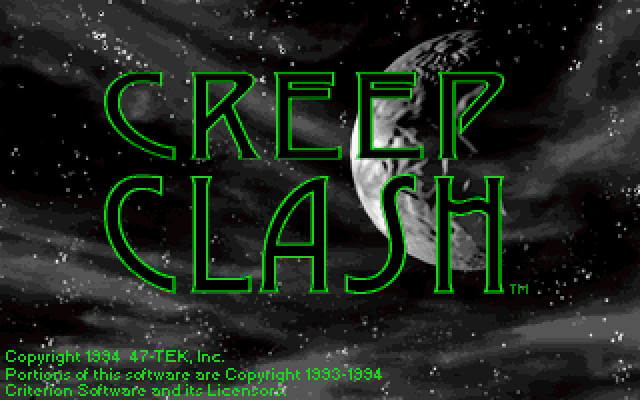 The monsters of Necrovania are squabbling for power. Who among them will be crowned the new Great Lord of Necrovania, the “ghastliest ghoul,” to lead the undead into the land of the living on Halloween night? Will it be Pumpkin Pyre, the living jack-o’-lantern? Or perhaps Demon Spawn, the floating horned creature with his chest splayed open to the horror of all who see him? These monsters could’ve come out of a cute direct-to-video knockoff of The Nightmare Before Christmas. Alas, they’re stuck in this awful fighting game. 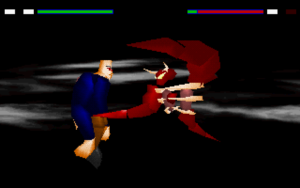 Creep Clash does for fighting games what Angst: Rahz’s Revenge did for first-person shooters – reducing a genre, maybe even the entire medium of video games, to a single unemotional action. Every playable monster only has one attack, a big haymaker punch with a long startup, somehow both difficult to connect with and difficult to block. To the extent that you can play Creep Clash, it’s less Street Fighter and more Rock ‘Em Sock ‘Em Robots suffering from exhaustion.

Before Creep Clash, the developer 47-TEK made another 3D fighting game called Sento, which is very similar, but with a space-fantasy theme and decapitations. It’s worth pointing out that a fully 3D fighting game like this running on computers in 1994, using an early version of Criterion Software’s once-ubiquitous RenderWare engine, was if nothing else a technical accomplishment, and it makes sense that 47-TEK would want to reuse their work for another fighting game. And yet Creep Clash doesn’t take advantage of the 3D environment because… well, because there is no 3D environment. In place of the swords-in-space backdrop from Sento, the fights take place in the ancient misty battleground of Cemetoria, which happens to be enshrouded in darkness. So the background is completely black. You can still move in 3D, but the camera stays low to the ground; any sense of depth is an accident. It feels fake as well as disorienting. You’re a monster drifting around an empty void, a demon with no chest in a world with no floor.

I want to give games the benefit of the doubt more often and appreciate them in their own context. Old action games can be clunky, and maybe that could be due to technical constraints. That’s why the shortcomings in Creep Clash are so surprising! It seemed bad already, but it introduces a major new problem compared to its predecessor and it holds up even worse.

The one unassailably good part of Creep Clash is the concept of a Halloween fighting game. Given two similar games, if one is a Halloween game, the Halloween game is always better. Whoever wins the title of the next Great Lord of Necrovania should be allowed to take that Halloween energy and join any other fighting game of their choice.

Although it’s not mentioned in the game, the official Creep Clash website says that the fight was instigated by the death of the queen of Necrovania, the Great Witch Halo Een, who we can assume was so embarrassed by her name that she died.