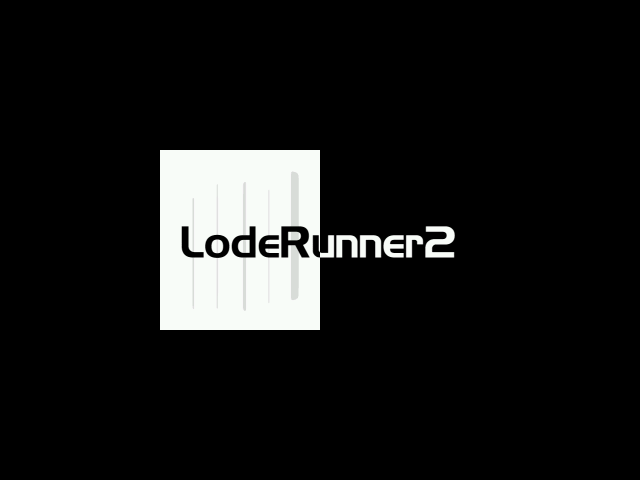 As computers and consoles increased in power during the 90s, more game franchises moved from 2D to 3D. In many cases, that was simply a change in perspective – avoiding real-time 3D graphics and going with a slightly angled camera view to add a third dimension. Sonic did it. Lemmings did it. And inevitably, Lode Runner did it too.

When Presage Software bought the rights to the puzzle game series Lode Runner, they rebooted it with more attention to theming than the sparse, vaguely subterranean 1983 original game. The pseudo-3D sequel keeps going in that direction, the more intense theming along with the new dimension. 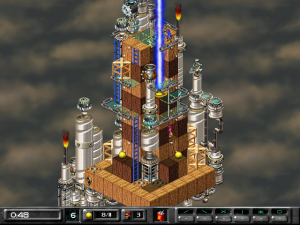 In complex stages, height and depth are hard to pick out

Lode Runner 2 has the same bones as the earlier Lode Runner games. It drops you into maze-like stages to collect pieces of gold while escaping from wandering enemies. You get around the mazes by climbing ladders, hanging from pipes, and using your laser weapon to dig holes and trap the enemies chasing you (in this game, they’re the cloaked order of Monks). Aside from the minor inclusion of items like an invisibility powerup, Lode Runner 2 sticks to the basics and stretches them out into 3D.

The new depth adds a lot to the screen. In 2D, pipes, ladders, and bricks all sit in a single plane and look pretty simple. In 3D, it’s thick. Everything is overflowing with visual information; every surface has texture to it. All piled together, it can be difficult to read what layer something is on. I loved navigating these stages and climbing around the jungle gym structures, but because of their busy visual language, I sometimes couldn’t tell what was below or above me or where platforms ended. Thankfully, you can only fall off of the corners of platforms, assuming you can see them – one of the game’s awkward compromises to represent 2D platform gameplay. The controls are also stuck in that middle ground, particularly the four separate buttons for digging in different directions and their all-around mushiness.

But again, the new depth adds a lot. The heavy layering and busy level design look incredible. Lode Runner 2‘s stage themes have plenty of excuses for an indulgent level of detail. The whirring, wooden machinery in Gear World, floating in storm clouds. The eyeball plants drooping amid Jungle World’s root-covered cliffs. Mona World’s Escher-inspired Renaissance dreamscapes. The plastic-y psychedelia of Wacky World. For the same reasons the game is sometimes confusing, its visual density is intoxicating to play in. 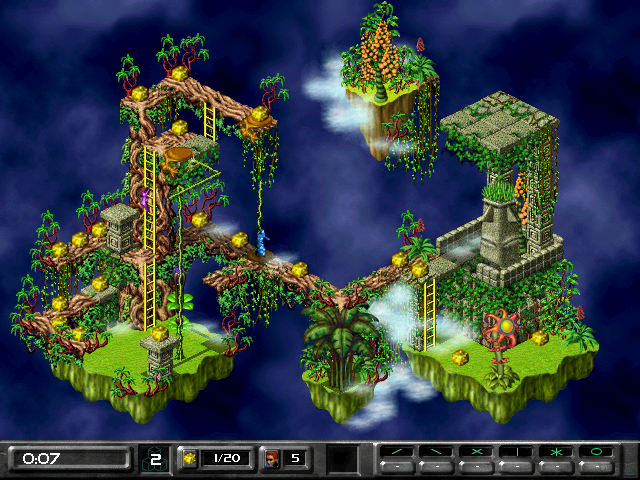 Who would ever want to leave Jungle World?

The levels take the spotlight in Lode Runner 2. Across 102 levels, the game finds a great balance of slower stages focused on puzzles and navigation and more frantic ones with Death Monks trying to split you in half. Although they lean on some tricks, like using your laser to dig a small hole downwards, they’re always at least fun to piece together. The game’s most inventive tools are the bomb items, which only explode in straight lines (up and down, side to side, etc.); they force you to think about stages in three dimensions. The seventh level of Gear World, “The Floating Bomb,” uses gravity and bomb chain reactions for a brilliant, multi-dimensional puzzle that wouldn’t have been possible as an adaptation of the original 2D gameplay.

The transition to 3D makes Lode Runner clumsier but gives it a strong flavor – and a unique identity. Despite the hedonistic themes, the game doesn’t really care about how you got there, what the Monks want, or why you’re collecting gold. Its manual outright suggests that you don’t read it (“This is just a bunch of printed words. On paper, nonetheless. Blah, blah, blah.”) The game saves all the love for the levels. Can you blame it?

Like the original game, Lode Runner 2 comes with a level editor. Presage made all the game’s levels using the editor, which they admit is unstable and never intended for public use.

The only things you can’t add with the level editor are Yums, mythical donut items buried in the deepest corners of the game. They don’t seem to do anything, and that’s part of the fun.