The Lost Mind of Dr. Brain 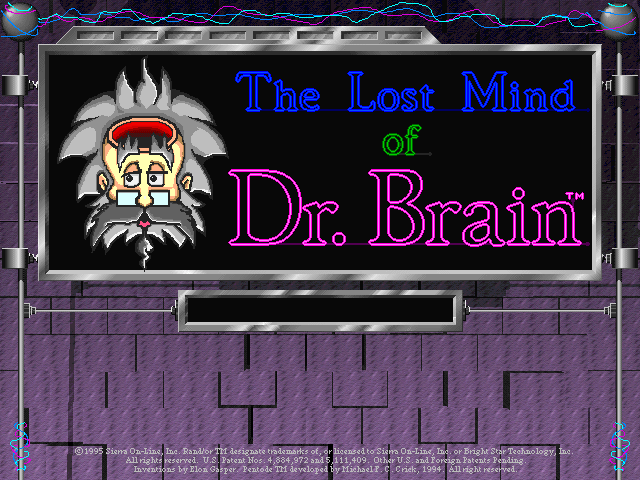 No, not The Oregon Trail again. Think harder.

The game you just thought about probably taught a single subject really, really well. Classics like Carmen Sandiego, Math Blaster, or even Mario’s Time Machine all focused on a single topic – geography, math, history, etc. – and drove it into children’s skulls with the hawkishnses of a car salesman, hoping they’d retain at least a little bit of whatever subject.

The Lost Mind of Dr. Brain is a little more ambitious if generalized in scope. It tackles the subject of brain functions, trying to expand players’ minds in comprehension, logic, spatial cognition, and linguistics. Not only does it work, it’s fun, and I had just as good of a time playing it as a twentysomething as I did as a hyperactive kid.

Lost Mind is the story of Dr. Thaddeus P. Brain III, a brilliant scientist who invents a machine to transfer some of his intelligence to his pet rat Rathbone. Against the wishes of his niece Elaina, Dr. Brain activates the unfinished device. A technical snafu involving a large block of cheese accidentally feeds too much brain power into Rathbone, melding the doctor and his rat together. To bring Dr. Brain back to normal, Elaina will have to rebuild his higher brain functions manually – with your help, of course – through a series of brain teasers. 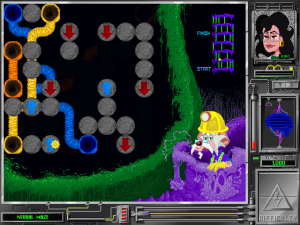 Previous games in the Dr. Brain series wrapped their mind-benders around a loose narrative frame, usually involving a task the doctor assigned that required jumping through contrived word problem hoops set up throughout his castle. Thankfully, Lost Mind throws out the story in favor a no-frills level select, taking out the awkward middleman between the player and some otherwise interesting puzzles. With Dr. Brain’s total cranial reconstruction as its new context, the game divides the exercises into ten sections that target different parts of the mind, ranging from twitch-action (marble obstacle courses) to the plodding methodology (computer programming). The variety is pretty impressive, especially since each category has a uniquely appropriate theme; the memorization and sorting game, for instance, has a Twilight Zone/television motif, complete with a Rod Serling-alike. You can’t criticize it for lack of effort.

With such variety naturally comes some inconsistent quality and difficulty. There’s quite a few winners in Dr. Brain, such as the 3D construction game that has players studying large cube structures and rebuilding their blueprints. Others can be too difficult or light on the edu-puzzle aspects. “Pentode” requires memorizing American Sign Language and the periodic table at a fast pace, while “Synaptic Cleft” has you herding cattle substitutes around a Western corral for god-knows-what reason. The various difficulty levels dull some of the worse aspects, but it’s unfortunate that several of the games aren’t as well-balanced or fun as others.

That said, the ones that work are fantastic. One particularly memorable game is “Music Region,” which involves reordering measures of sheet music. Higher difficulty levels call for flipping these snippets horizontally or vertically. It teaches music and fuels creativity with the same tools that it uses to entertain. Other highlights include the Boggle-like “Word Surge,” the increasingly complex “Neural Maze,” and the frantically infuriating multitasker, “Train of Thought.” Given that they test brain function and talent rather than drilling facts, these games still hold up years later without cramming the educational aspects down your throat.

Lost Mind owes a lot of its charm to the artists at Sierra and its subsidiary Bright Star Technology (which took over the series starting with this game). Each character is vividly and expressively animated, no small feat given the graphical limitations. And while it’s not Don Bluth quality – no one ever runs around or performs great acrobatic acts or even moves from their seats – you would be stymied trying to find more detailed or emotive facial expressions. The rest of the game’s graphics match in their colorfulness and dark industrial style, as does the goofy 90s alternative soundtrack. The package drips era-specific appeal.

What we end up with is a rarity: The Lost Mind of Dr. Brain is fun because of its educational premise. That may be the highest praise an edutainment game can get. It expands the mind without the arbitrary gymnastics of Brain Age, or the shoe-horned trivia-like nature of Carmen Sandiego. Not every swing connects, but when they do, it’s nothing short of magic.

The Lost Mind of Dr. Brain was originally developed under the title Dr. Brain 3: Brain Damage.