SimIsle: Missions In The Rainforest 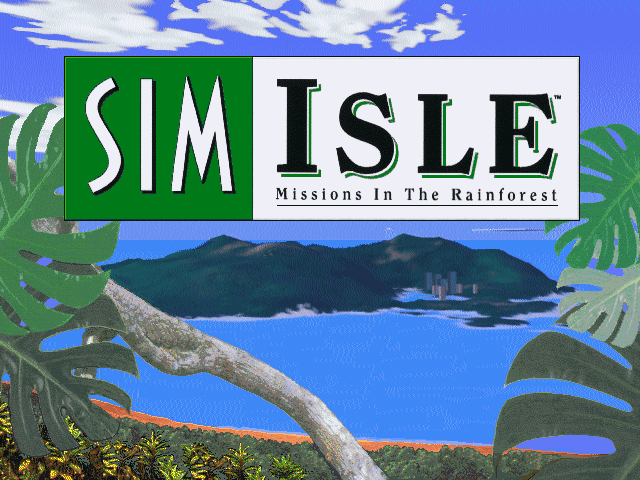 It would be easy to write off SimIsle: Missions In The Rainforest as “SimCity on an island.” This was the ninth commercially released Sim game published by Maxis, and by this point, the studio may have looked predictable. How many SimNoun titles could they release?

What distinguished Maxis’s Sim games was that they weren’t just about making cities or farms. They were interactive toys where you could play around in a sandbox with concepts about science or society. Not necessarily accurate portrayals of those concepts, but a distillation of them, attempting to be faithful to the spirit of how they interact. SimIsle, developed for Maxis by the British company Intelligent Games, isn’t simply a new location: it’s also a new set of ideas to experiment with. And one of the most critical this time is your interaction with the environment.

You’re the manager of the development on a rainforest island, somewhere out in a cluster in the Pacific Ocean. In this self-contained setting, you can see how nothing happens in a vacuum. Everything has a background, and everything comes with a cost – transportation budget for trucks, boats, and planes moving people and supplies; maintenance costs for the structures you build; and salaries for your staff who keep the development running. The costs aren’t limited to money. You’ve basically invaded an island, and your actions will leave scars on its ecology and culture. 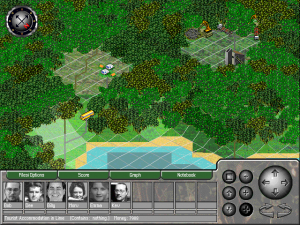 Development underway. The island starts crawling with energy as construction begins (look at that little bus!)

Although you can play SimIsle as an open-ended sandbox in the style of SimCity or other simulation games, the emphasis of the game is on individual missions. Each island in the archipelago has a specific task to complete. Your motivations for colonizing the islands vary, but the goal almost always involves extracting some profit from them – whether that’s with tourism, starting a manufacturing industry, or mining their resources and oil.

The game takes so many directions that it could easily lack focus without an objective, even by the standards of a Sim game. Instead, the missions help concentrate you on specific scenarios that expose you to a wide range of environmental conditions and goals. Some missions don’t care how terribly you treat the island (“just take what you can as quickly as you can”), while other missions expect greater care. They may task you with restoring an endangered species or developing a tourist industry while preserving a pristine ecosystem. Whatever you’re pursuing, the footprint of your operation continually grows and gets more complicated to maintain. It starts with an iron mine in the mountains; then a steel mill; then a warehouse; a heavy industry plant; a city to support the factories; a power plant to run the city; a university to train the engineers. Then another iron mine once the first one runs dry.

The SimIsle manual accurately calls the islands “a dense web of complex connection, of eco-interactivity,” and that’s the thrust of the game. The goals in SimIsle are something to work towards, but the real understated mission of the game is to explore the dynamics of development, the interwoven relationships of the environment and labor that enable it, constrain it, and react to it. The game deals with internal dynamics – the people you hire to make the work happen – as well as the external pressures of an ecosystem that you both depend on and threaten.

Nothing happens without other people. You’re the administrator in charge of developing the island, so you aren’t the one going out into the mountains to build a mine. This is something we take from granted in other Sim games because we can do the construction and set taxes ourselves, but SimIsle makes the work visible. You need a team. 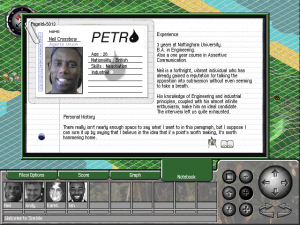 Neil Crossbow has an amazing name and serious negotiating skills

To do anything, you have to hire the right people for the job. The team members in SimIsle are individual people with different skillsets and backgrounds. To build a structure, you hire a construction expert like Bob Moon, a civil engineer who protested against rural development while he was studying at the University of Wolverhampton. Or Morven Sloan, who was fired from her last job after sending two guys to the hospital for telling her that women shouldn’t work in construction. If you’re dealing with plants and trees, even tearing them down to make room for an airport, you need someone with a background in flora and forestry.

What SimIsle is accomplishing is putting a face on the labor behind an endeavor like this. Changing a manufacturing process isn’t as simple as pressing a button; it’s a person who travels to the manufacturing plant to supervise the changes. If they’re not doing their job effectively enough, you can call them back to your headquarters for training – which requires a human resources specialist on payroll. These are humans doing the work, and the costs add up. 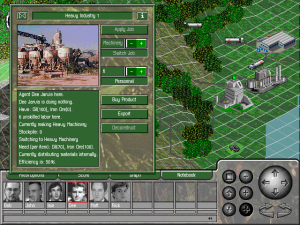 Sometimes their job skills sync up: only an expert in local culture can improve the quality of a tourism site, for example, but someone who knows the local ecology can help them. Most potential employees have two skills, so they could fill multiple roles. But hiring a team based on talents also means firing them when the circumstances change, and it shows how disposably people can be treated. It’s always valuable to have someone who can train staff or build, and if wages are getting too costly, the first person you’d fire might be, say, Andy Knitt, a zoologist with connections to the criminal community. Criminal connections are a niche skill you may not need anymore, but what if you still need a zoologist? If you’ve invested in Andy’s training, how easy is it to toss him out in exchange for someone with more a relevant combination of talents?

When the people doing the work have names, faces, and wages, it changes your relationship with the mission. Although SimIsle doesn’t get too deep into the possibilities here, the act of making a new building becomes more human.

Development in SimIsle is inherently destructive. You can see it happening. When you build anything – a city, a warehouse, an oil rig – the bulldozers move in and pollution levels rise. New roads are automatically plowed through the wilderness. Archaeological sites are converted into tourist traps, ravaging the indigenous history. 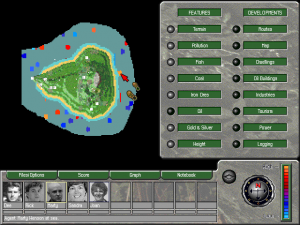 A map of the island’s highlights: where to locate pollution or where to harvest resources

The game recognizes how destructive this is. The manual – where Maxis would often include educational content about the real-world subjects of their games – warns that developments like the ones in SimIsle cause not only environmental damage but “cultural dislocation.” SimIsle wants you to explore those concepts and experiment with the fraught balance between, as the game’s packaging puts it, “ecology and economy.” But even by framing it in those terms, it puts the ecosystem in competition with the goals of the game.

Every action in SimIsle affects the environment to varying degrees. Starting a logging camp will always hurt the rainforest, but there’s a difference depending on whether they’re chopping down whole forests or practicing slow, sustainable logging. While a hotel may sound more innocuous, it still generates pollution and traffic. At points, the damage goes past environmental harm and into the exploitation of the indigenous people – drawing “unskilled labor” from local villages to run the factories, which lowers the villages’ quality of life. (You’re not helping them, the game says, only moving them closer to being “slaves of the corporate interests.”) On the other hand, some developments have a positive symbiotic relationship with the island. For your own cities to grow, the village farmers need to be happy too. 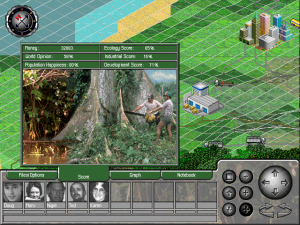 SimIsle keeps score as your developments wreck the local ecosystem

The game frames environmentalism as a balance. Frankly, it’s difficult to find value in the game’s idea of balance when it means you have to exploit indigenous people and build car manufacturing plants where there used to be jungles. SimIsle is a game about sustainable development, but it rings false to suggest there’s an environmentally friendly way to build a theme park on a tropical island.

SimIsle scores you on how well you’ve conserved the island’s ecosystem, as well as the global opinion of your operation. Even in scenarios where those scores don’t directly matter, they’re meant to steer you towards better practices, but sometimes they feel like a metric to see what misdeeds you can get away with. How much can you piss off the United Nations and still get rich?

Managing for people and the planet

SimIsle is explicitly an environmentalist game. It talks about the perils of deforestation and cultural displacement. There’s a disconnect when this environmentalist game needs you to damage the environment to win. It’s never a game that challenges the spread of industrialization. In the best cases, you’re still imposing yourself on an ecosystem that doesn’t want you there. SimIsle never overcomes that. But that contradiction gives SimIsle the room to approach its topics with, at times, a degree of nuance and uncertainty. It allows it to portray things like wildlife preserves not as good or bad but as complicated. The in-game instructions devote nine paragraphs to a debate over whether zoos and preserves have meaningful conservation value, and while that doesn’t noticeably translate into the game (much like the staff backstories, another area of quiet characterization), SimIsle uniquely deserves that level of ambivalence. 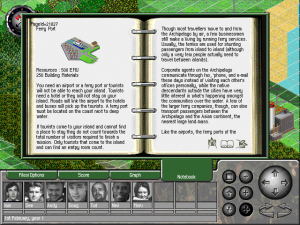 The guide to ferry ports even covers their geopolitical implications

Though it has mixed success, SimIsle tries to make its complications visible and to force you to deal with them. The human elements in the game wouldn’t matter if you could hire everyone and pay their salaries and training costs with no problem, but you can’t. That’s one of the upsides of a mission-driven Sim game. It throws you into situations that force you to compromise or to address new elements of the simulation.

It can take a while to get accustomed to playing SimIsle. It’s not the most intuitive game in terms of the interface, controlling your staff and your buildings, or figuring out how the different systems on the island interact with each other. Once you pick up on it, working with the complexities of teamwork and environmental stewardship is a satisfying challenge. SimIsle pays attention to its relationship with the world around it, and the shifting focus, inward and outward, helps connect your human-scale management problems with the bigger picture of your impact on the planet.

As muddled as its messaging can be, SimIsle feels like it could suggest a foundation for a different type of Sim game – one that puts your work in a global, ethical, political context.

In an interview with the environmental management publication The Skimmer for the game’s twentieth anniversary, SimIsle‘s lead designer Matthew Stibbe said the game, originally under the prototype name Eden, was developed “in about 18-24 months at a cost of around US $400,000.” Information about budget for game development seems to be a rare thing to disclose, but since Intelligent Games made this game under contract for Maxis, they would’ve known the cost. (Not counting however much Maxis spent on their end for publishing and so on.)