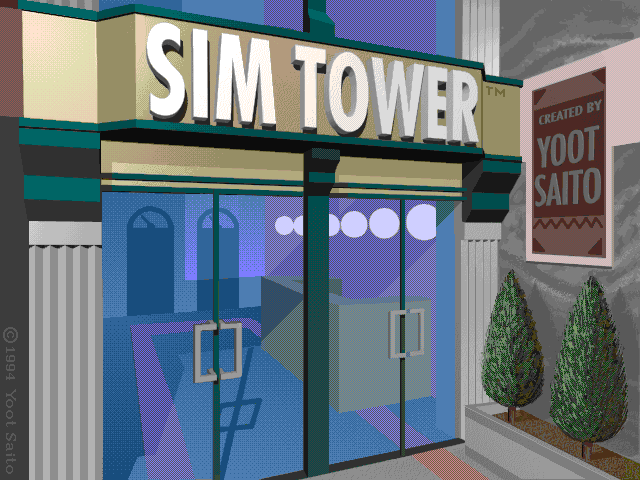 It might come as a surprise that Maxis published another developer’s personal curiosity as part of their Sim series, but it fits in the tradition of Maxis games taking a real world concept, like urban planning in SimCity and blowing it up into a game. The big surprise is that Saito does the Sim formula better than Maxis did. His take on the Sim series is more intimate, working at a more human scale, and that makes it one of the strongest entries in the series.

Saito is best known for his unconventional games, especially Seaman and Odama, two games controlled with microphones, but SimTower has an even bigger place in his caree. Not only was it his first game, but it was also the start of the Tower series, which he’d continue years later on other platforms. With SimTower, you can feel how his collaboration with Mxais influenced the tone of the series. Like other Maxis “software toys,” you start out with an open dirt lot. You’re tasked with building a skyscraper through its various phases of development, gradually unlocking new property types as the size of your building increases.

Unlike SimCity, your skyscraper has an end point, the 100th floor, where you can cap off the tower by building a cathedral. A final goal like that is relatively new for a Maxis game, and it helps focus the progression of SimTower. After all, there’s a limit to how tall you can make a building. 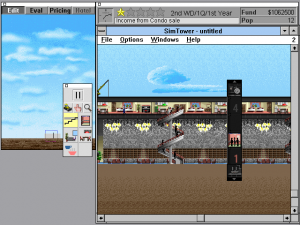 Where SimTower really excels is the down-to-earth scope of the game. Something like Maxis’s SimEarth looks at the world at a macro level, measuring time in hundreds of years and watching the evolution of life. SimTower, meanwhile, goes one day at a time. When the sun rises, businesses open, and when it sets, everyone goes home. Rather than dealing with large infrastructure problems, people might complain that their neighbors are too loud, that the elevators don’t run fast enough, or that their parking space is inconvenient.

Like any ecosystem, you still have to keep the tower in balance, but it’s about smaller-scale issues. How much of the building should be office space versus residential units? Should you use valuable space underground for a recycling center or a train station? Do you invest in condos or hotel rooms?

It’s not just that SimTower frames problems at a physically smaller level, but a more personal one. You can track individual people as they go to and from work, letting you observe their family life and commute. Once you’ve become a full-blown hotel, reviewers will stop by; you can follow them throughout their stay, seeing what services they use. After you put in service elevators for maids, you can observe how efficiently they work and whether they’d want additional transportation. Natural disasters are replaced by terrorist attacks, where the placement of individual security officers determines your building’s chance of survival. 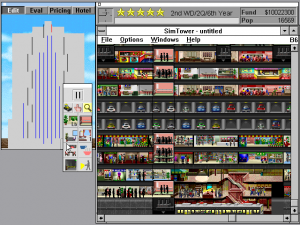 The tower that could be, but probably not

This is a quite a different tone than the broad statistics that other simulation games tend to throw out. There’s no better expression of this than the feature that lets you name and color-code specific people. When they pack up and move out, it can feel like a real loss.

The vertical focus does also lead to some constraints that the rest of the Sim series doesn’t run into as frequently. You’re physically constrained by the footprint of your building, so if you want to convert a bunch of offices to apartments or some similar, you have to tear down a significant chunk of the building to accommodate the change. You need the forethought to plan space for future big-ticket items like movie theaters without upsetting your other tenants. Creating a successful five-star building takes considerable planning, and that’s difficult given how your creations can grow organically in games like this; even so much as a misplaced elevator from the beginning of the game can eventually set you back thousands of dollars to correct. This is probably true for real skyscrapers too, but it can be frustrating given the reactive ways that other Sim games can grow.

SimTower remains one the more personal games Maxis published. Not just personal in its scope that deals with individual people, but personal to the creator, Yoot Saito, who designed a whole game because he was curious about how elevators worked. It’s a perfect distillation of what made Sim games special at their best, an ecosystem that mirrors our real world in a fun way to learn more about it. At the end of his introduction in the game’s manual, Saito put it beautifully:

This article was significantly revised on May 4, 2020.