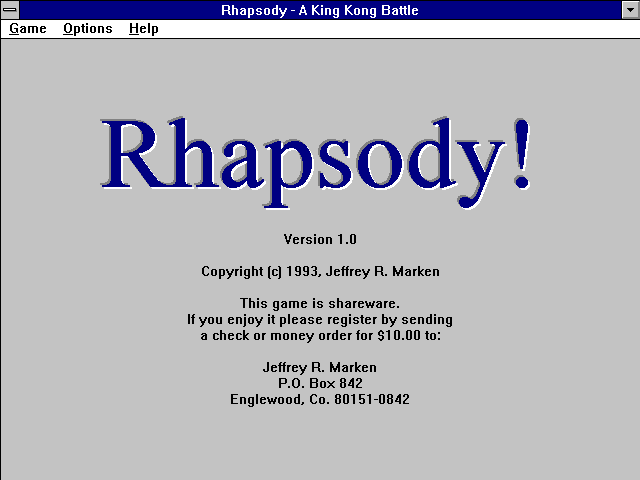 It’s not clear what spurred the existence of multiple tactical games in the early 90s about gorillas duking it out in the big city. The best known is Gorillas, a game that came bundled with the QBasic programming tool for the MS-DOS operating system, where two gorillas lob exploding bananas at each other from opposite ends of a city.

Then there’s the inexplicably but poetically named Rhapsody! A King Kong Battle. Who knows what that title means – maybe it’s trying to invoke the sweeping Americana of Rhapsody in Blue to go with the city? – but despite the musical name, it might be one of the most robotic games with a gorilla. 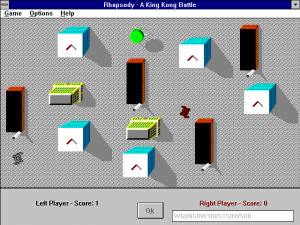 A mild sense of vertigo hanging over this poorly planned city

In a way, they’re fairly similar. Both games are about trial and error. In Gorillas, you take turns typing the angle and strength of your throw, like a game with artillery cannons, adjusting your aim until someone gets blown up by a fatal banana. In Rhapsody, instead of flinging anything, the gorillas are running around a city. You give the gorillas instructions about how many pixels to move – north 300, east 150, south 100 – and if they stop or hit a building, they go back to their starting place. The goal is to see who can reach the other one first. Like in Gorillas, the tension keeps rising as the apes get closer to their targets. It isn’t shown, but presumably, it ends with one gorilla beating the shit out of the other gorilla.

The kicker is that the gorillas take their directions in the form of a single long string of characters – N300E150S100. This is not gorilla-like at all. It’s more like programming a robot. Or transmitting encrypted orders to a submarine running silent through Soviet waters. You can imagine an old mainframe spitting out ticker tape with gorilla code.

Typing out directions in this syntax is simple enough, but it’s an outstandingly arcane way to play a computer game. It could just as well be a game for a computer terminal from the 70s. Rhapsody runs on Windows 3.1, a more robust operating system than MS-DOS with built-in support for mouse input and window interfaces, but it’s even less intuitive than Gorillas is.

Games for Windows 3.1 can feel like they’re learning to take advantage of the capabilities of the platform. Rhapsody! A King Kong Battle looks like it’s using the features of Windows 3.1, too, while actually doing nearly the opposite, stubbornly running on gorilla code.