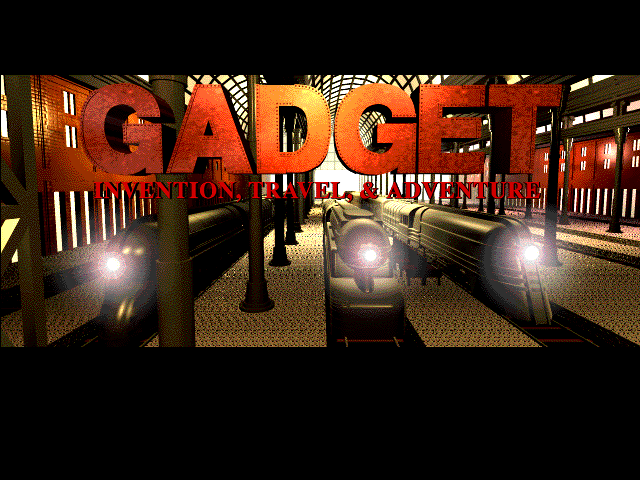 GADGET is a nightmare. I don’t mean that in a pejorative sense. It very much has the qualities of a nightmare. The game ambles in repetitive and disorienting directions, chained together by irrational, non-sequitur plot developments. Imagery is bold and surreal, punctuated by out-of-body experiences and blurry detail. It is unsettling.

Developed by Japanese studio Synergy Inc., GADGET: Invention, Travel, & Adventure lacks much of the mechanical structure we associate with games. There is little meaningful interactivity. But because the experience is so un-game-like, so rigid and suffocating, it evokes genuine confusion, terror, and discomfort. This is not a game that will make you jump, but once you’re deep within GADGET‘s pseudo-Soviet web of intrigue and conspiracy, some gut reaction will tell you that it should not be happening. 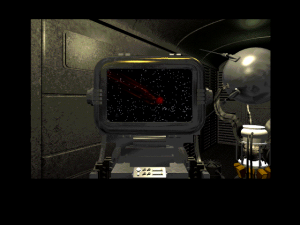 Is this really the comet? Who knows!

GADGET sends players to a surreal, expressionistic Eastern Bloc country where a group of rogue scientists predicted the impending end of the world at the hands of a comet. You are employed by the mysterious inspector Slowslop to hunt down Horselover (yes, really), the leader of the fringe scientists. With little fanfare, Slowslop hands you an old photograph of the scientists and dispatches you down the Grand Central Railway in search for any clues about what the scientists may be planning.

And clues you do find. The road to Horselover is riddled with weird happenings and red herrings, like a mysterious child who steals your luggage and a Sputnik-esque satellite that broadcasts images from the future. Half the characters you meet insist the comet is a lie and that Slowslop is a disreputable pervert, while the others ramble about self-mutilation and plead that you believe the scientists. Only about a dozen or so people exist in the world of GADGET, and each seems to follow you around with extreme suspicion. Slowslop also behaves erratically: he will randomly appear along the Grand Central Railway and update your assignment, at one point telling you to stop following Horselover and simply conduct surveillance on train passengers. Once you finally meet Horselover, the story turns to a race against time as the scientists attempt to build the Ark, a spaceship from which to escape the imminent apocalypse.

The plot hinges on Sensorama, a kaleidoscopic device made from scrap metal that the scientists supposedly use to control their subjects. Everyone in GADGET has an opinion on Sensorama, but it is very unclear what it actually does. The scientists insist that the device “draws out latent powers,” while skeptics insist that it is a mind control device used to create legions of followers who will cripple the world with fear over the comet. A film found within the Museum of Science supposedly elaborates on the function of Sensorama, but it’s just a contextless clip of a man convulsing in a chair. When you come face-to-face with Sensorama at the end of the game, it’s clear that the device is bad news – but its specific function remains a mystery. 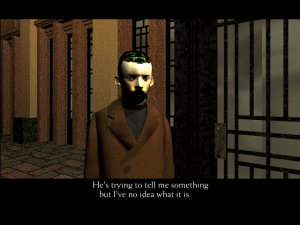 GADGET’s disturbed characters are perpetually hostile and illuminate nothing

Needless to say, it’s bewildering, and worst (or best?) of all, nothing is ever explained. It appears that the scientists are connected via Sensorama and the Ark to an evil dictator, but this third-act twist just raises further questions. What does the dictator want with these devices? To take over the world, maybe. Is there actually a comet? It’s uncertain. Were Horselover and Slowslop collaborating the whole time? Possibly, but for unclear reasons. Who was that weird boy? Apparently Slowslop’s true form. Were those other suspicious people in league with the scientists? Sure, why not. There’s no wrap-up; you are subjected to Sensorama, presumably rotting your brain, and the little boy flies away in a zeppelin.

GADGET toys with themes of memory and control, but they (intentionally?) lack any cohesion. It’s frankly liberating to play a game that never attempts to clarify its baffling story, but you’ll still exhaust yourself tracing the various plot threads before it becomes clear that they’re all dead ends.

The dangling narrative only works, though, because of how the game presents and builds the bizarre, inscrutable Grand Central Railway.

In GADGET, you have very little control of your surroundings and circumstances. At each stop along your journey, characters from the game’s limited cast recurringly appear in too-convenient places and coerce you along a particular path. You are usually restricted to this one direction even when alternative paths exist. In the opening section of the game, for instance, you are told to walk down a hallway towards an elevator bay, but you cannot walk back the other way. Later, your train’s conductor insists that you disembark at a way station only to ask you to reboard immediately. At a point when you finally take control of a plane, a symbol of freedom of movement, your character immediately grounds it and gets back on the nearest train. Once in a while you don’t get to walk to your destination; many sections of the game are replaced with blurry black-and-white cutscenes automatically sending you to your destination. Sometimes your movement is just implied through disembodied, abstract cutscenes, almost like establishing shots on a TV show.

When you do get to explore it, the world of GADGET is almost entirely abandoned and sterile. The first half of the game sends you to the massive and garish East End train station, but once you arrive there, the terminal is deserted. The only people you ever encounter are a handful of plot-important characters standing in odd places to point you towards a specific door. 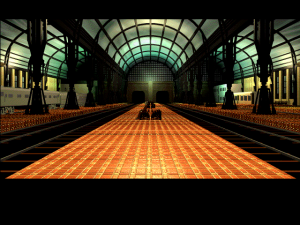 In all these cases, the player is robbed of agency. Much like game’s ubiquitous trains, you are always moving forward on a fixed track. There is never any choice in what you will do next and rarely an opportunity to explore on your own terms. This feels so very, very uncomfortable.

Different circumstances could have made this look like a cop-out to limit the size of the game. But in GADGET, it feels like a large-scale gaslighting attempt. In a telling example, the few items you receive fit perfectly into unusual slots in your suspiciously acquired inventory suitcase. Was this whole thing a setup? Is that why it’s going so smoothly with almost no hangups? Why are the only people in this world directly concerned with my mission? And why am I going along with them? It’s too weird that every single person along this railway would be trying to drive a single person insane. Considering all the focus on the ambiguous Sensorama, this might even be a depiction of mind control.

The whole endeavor just feels wrong. If you’ve seen The Shining, you’ll remember that the Overlook Hotel has an otherworldly and hostile aura despite much of the movie lacking overtly supernatural elements. GADGET comes across the same way. Each second of the game is filled with paranoia and dread. Every cryptic story about mind control, every abandoned and unexplorable railway station, and every allusion to an apocalyptic future builds on a suspenseful and overpowering darkness that is never resolved and ultimately leaves you with empty uncertainly. A rhythmic, discordant soundtrack teams up with the blocky and unsettling visuals to undercut even the seemingly normal scenes, throwing their tone into chaos. Nothing in GADGET feels safe – usually just because of its aura of disorientation.

That aura is what sets GADGET apart. On paper, GADGET‘s story and linearity sound alienating and unenjoyable. In practice, it thrusts the player directly into that alienation and asks them to share in the confusion. This is a game largely devoid of puzzles or substantial gameplay (save for a single maze at the end), but by stealing these opportunities for input from the player, it creates a distant, hands-off world that always sits just outside the cusp of understanding. There is a strong possibility that this atmosphere is an accidental result of terrible craftsmanship. But after multiple playthroughs, the Grand Central Railway still defies and intrigues me, and that’s a hallmark of transcendent world-building.

GADGET was apparently successful enough to elicit a number of spin-offs, including:

I’ve had the pleasure of experiencing some of these first-hand, but they’re about as weird as you’d expect. Past as Future is unusual in the degree to which it is nearly identical to the original: the cleaner edges (smoother transitions, for instance) wipe away some of the original’s mystique, but scene-for-scene, it remains the same experience. This version was at one point available for iOS under the name iGADGET HD, but it sadly now appears unavailable.

GADGET seems to have picked up a small cachet with filmmakers in the 90s. Guillermo del Toro, acclaimed director of Pan’s Labyrinth and Pacific Rim, considers GADGET a personal favorite game and an important influence on the dark industrial film aesthetic of the late 90s. David Lynch also said GADGET “delivered an immense experience” and briefly partnered with Synergy to develop a similar game of his own, titled Woodcutters From Fiery Ships, which unfortunately fell through. Could you imagine?!