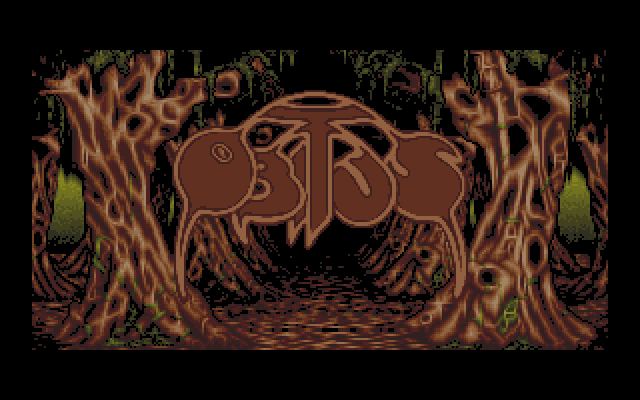 No game would benefit more from a built-in map than Obitus. Disorientation is Obitus‘s baseline, and your sense of place rarely improves from there.

This exploration-driven RPG has some neat parts, like simple combat and some very pretty, muted visuals. An oppressive sense of directionlessness overwhelms almost anything else the game tries, though, and that’s hard to look past.

Obitus thrusts players into the cavernous fantasy world of Middlemere, where four kingdoms rule in relative harmony. Your character, Wil Mason, lives in modern suburbia and warps into Middlemere after a freak storm. Mason only wants to return home, so you’re left to wander the four kingdoms, killing monsters, finding food, and searching for an escape. Apart from this exposition (taken from the manual), there’s little narrative or assistance. Sometimes friendly characters will appear and offer bits of wisdom and trinkets, but they rarely elucidate your situation.

I really wanted to like Obitus after immediately falling in love with Middlemere. The game uses a very limited color palette, but the artwork is sublimely detailed and animated. You can sense the encroaching darkness of the woods or the din of an abandoned mine, and despite this being a first-person game with two-dimensional artwork, movement animations complete the illusion that you are forging through the kingdoms of Middlemere and not jumping through disconnected scenes. The soundtrack, though extremely minimal and stark, helps in this regard too. It conveys the triumph and fear inherent to any adventure with some serious musical economy. 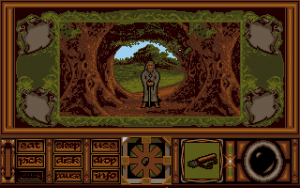 A stranger waits at the woods’ edge

Yet for its agreeable setting, Obitus refuses to be explored. To traverse Middlemere, you move between “rooms” by walking in any of the eight standard compass directions. This is fairly normal; plenty of great role-playing games have a similar system. The problems come from the game’s complex layouts and, more importantly, its failure to address them. A drawing of Middlemere would less resemble a maze than a tattered spider web, and the game provides no way of tracking your current location within there. There are no maps, but worst of all, there are no distinguishing features to any scenery. You can’t tell if you’re going in circles in Falconwood, for instance, by looking for landmarks or changes in the foliage. Everything within a given area looks identical. Without hand-drawing a map, you would be completely unable to locate anything, ever, even with directions.

(The manual specifically advises multiple times to draw a map and admits that “everywhere you go things look pretty much the same and it’s hard to keep track of where you’ve been.” That doesn’t absolve the game of a known issue.)

If that much mapping and retracing doesn’t bother you, you can probably find something to enjoy in Obitus. The game has a few good flourishes, especially its simplified combat that only involves clicking on the screen to shoot arrows or throw daggers. But the constant inability to orient yourself or discern your surroundings proves too distracting for any of that to stick. I reached a point in the story where an elder gave me a mysterious blue gem, but I couldn’t even begin to figure out its purpose since I couldn’t tell where I was. This is a higher level of lostness; the game drowns in its own world.

The game does offer an occasional respite from the meandering exploration by switching to side-scrolling action sequences (in the style of Zelda II), but they introduce different problems. You can’t get stuck in these segments since you’re just moving left or right, but their twitchy combat and all-around clunkiness feel at-odds with the rest of the game’s pace.

I had to quit Obitus midway because I couldn’t find any path forward or backward. When I went back to an older save file to retrace my steps, I couldn’t figure out how I got there at all. That’s awful. Before voyaging into Middlemere, bring some graphing paper or don’t go at all.