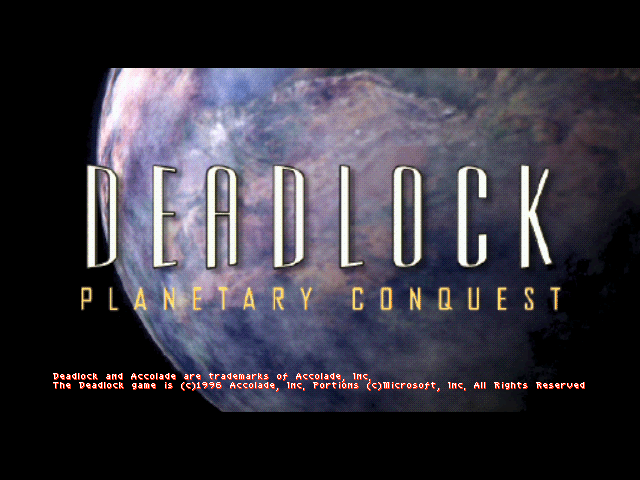 Despite what the title suggests, Deadlock: Planetary Conquest doesn’t actually involve conquering a whole planet. It’s about conquering a region, a slice of the planet made up of different territories. It allows you to get close enough to look at the individual workers on the planet, yet it keeps you far enough away so you can see the regional dynamics that drive the planet’s aggression.

The planet is Gallius IV, a distant, deserted world with randomized climate and terrain. A group of aliens have descended on Gallius IV, and they’ve agreed to a colonization arms race: everyone will settle a colony with limited resources, and whoever stakes the strongest claim will take the planet for themselves. 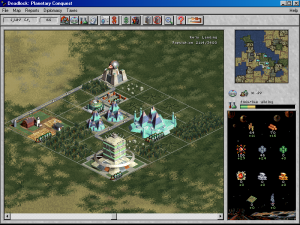 If Deadlock isn’t a direct copy of expansionist strategy games like the Civilization series, at least it owes them a huge debt for liberally borrowing their themes and appearance, even the style of their interfaces. The colonists use labor and natural resources to build cities and take care of the upkeep for their empire. Over time, they research new areas of science, discovering advancements in technology and more powerful weaponry.

The space colonization theme goes off in a slightly more fantastical direction from there. The seven colonizing species have unique cultural traits, like the anteater-esque Uva Mosk, who forage for resources at an accelerated rate. (The humans landed too, and they dress like explorers from the Italian Renaissance, appropriately on-the-nose for a game about colonization.) An eighth alien species orbits the planet, profiting off the war by selling resources and information on the black market, though turning to them will lower a colony’s morale. Extreme environmental events will rock the planet, from plagues and earthquakes damaging cities to ion storms that block out the orbital mapping satellites.

The expeditionary sci-fi story translates well to this genre about spreading across a new world, though sometimes the futuristic elements obscure what you’re progressing towards. Technologies like Chaos Computers and Cortex Scanner sound cool as hell, but at a glance, they don’t give much indication of their purpose besides more resources or military power or whatever. 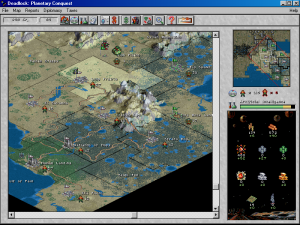 Rather than try to rework the format too drastically, Deadlock puts attention on the planet you’re colonizing and the impact that its physical and political geography have.

Ostensibly, your goal is to take over the entire planet, but the game smartly keeps focused on a smaller region of Gallius IV. The randomly generated features of the region are grouped into territories with declarative, epic names – Redemption Cliffs, the Bog of Hope, and, less poetically, the Nice Place with Trees. The colonies control these territories as whole units, staking out the entire chunk of land when they start a settlement there. Zooming in reveals the lush, granular detail of the environment and your city, down to the roads paved between structures, the cars driving on them, and animated icons for the colonists working at your factories and energy plants. The game gives a broad view of the area but maintains your attention on the society you’re growing. After all, it’s the reason you’re there to begin with.

The neutral advisor Oolan doles out encyclopedic knowledge to all colonists

Building a colony is an act of constant, almost reckless growth – laying farmland across every field in area for food, constructing mines in the iron-rich mountains. One of the greatest problems, maybe more than direct competition, is how to manage the anxieties of overpopulation. You can shuttle colonists around the territories to even out the numbers, but there are only so many housing complexes or cultural institutions you can build to placate people before the realities of unchecked expansion settle in. The colonists will become upset and threaten to rebel.

The region has a finite number of territories. Inevitably, the borders of the growing colonies will run up against each other, and someone will strike first.

Nowhere is the importance of the game’s mid-scale perspective clearer than a hostile encounter with another colony. When troops from another colony attack, the battles unfold in real-time. The attackers enter from whatever side of the territory they’re neighboring, and they use the roads in the city to move around; colonists leave their workplaces and run across the city to fight back. Defensive installations in settlement like lasers will retaliate if an enemy comes near. The layouts of the cities matter.

You don’t control anyone here – and you could skip watching the attacks if you’d like – but it’s a hell of a display to watch a city get ransacked like this. It teaches a rough lesson: in this world defined by wide territorial claims, continuously expanding, there will always be someone next door waiting for their opportunity to strike, and for protection, you have to turn your part of the region into a fortress. 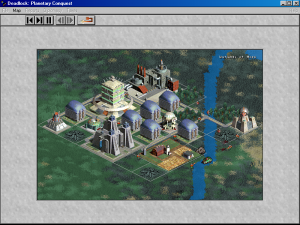 A city’s layout affects its defenses. The laser turret east of the river is too far from the city to stop the invasion

There is no meaningful peace or diplomacy in Deadlock. The only diplomatic options at your disposal are selfish: you could sell resources to another colony for profit, or you could give them military units to fight off a mutual enemy. (You can also send insults to start a war on purpose.) The more viable option is skullduggery, sending scouts to steal technology and stir up riots by undermining faith in the colony. Sometimes you have to employ that same suppressive force on your own people to quell rebellions.

The other way to win, apart from wiping everyone out, is to construct City Centers, powerful hubs of trade and culture. Their cost increases with each building, and the time needed to accumulate those resources leaves you open to attack. When another colony builds a City Center, the game encourages you to stop them, presumably with force. Even a theoretically peaceful victory has the expectation for a permanent state of war.

By staying locked into one region of the planet that becomes more claustrophobic all the time, Deadlock gives you a view of the dynamics inside the pressure cooker. Everyone is competing over limited tracts of land, and everyone wants more. More space, more food, more resources. Expanding the reach of your society and then pushing back against the limits can be a cathartic challenge – and also a reminder that this kind of untenable, competitive growth sucks. Would it hurt everyone to share?

Deadlock was re-released for current versions of Windows in 2014 and is available to purchase on GOG.com.

The original release of Deadlock contains a hidden acoustic folk song, performed by Deadlock designer and senior programmer Paul Kwinn, about the different aliens and how terrible it is to be a colonist. It’s goofy and endearing!