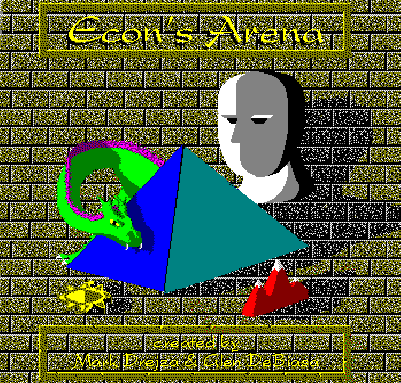 When the gods of the four elements began to battle, Econ, the Elemental Master, summoned them to his arena so they could fight without destroying the world. “Defeat me, or defeat each other,” Econ demanded. “I don’t care which occurs.” That’s a weirdly non-committal command to gods engaged in a battle to the death.

Econ’s Arena allows you to win both ways. But like Econ, the game is noncommittal about it too. Neither option gives a solid reason to play the strategy game through to the end – although its alluringly busy, colorful appearance certainly provides a reason to start.

Up to four people can play Econ’s Arena as one of the gods (Fire, Air, Water, and Earth) whose primary goal is to defeat the other gods’ legions of creatures in combat. The game board is divided into elemental zones that strengthen their gods’ armies. Over time, those zones shift out of alignment, and the arena’s terrain changes. When it periodically drifts back into balance, the gods regenerate their magic powers, like the ability to teleport their creatures, heal or resurrect them, or trap and weaken their enemies.

If the game enjoys anything, it likes staging all these elements in the arena. Each element uses one dominant color from the default Windows 3.1 palette (like cyan for air) and works it into both the creature graphics and the elemental zones that shift around the arena. 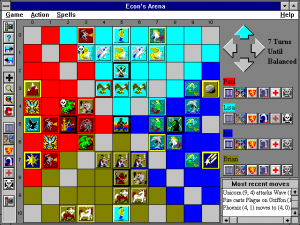 Hellhounds and eagles and wizards, oh my!

While I’d hesitate to say the game has a fleshed-out setting, the clear visual affection adds a lot to its appeal. Econ’s Arena is a cluttered game dotted with bugs and some truly bizarre MIDI music sound effects, and it certainly puts care into its clutter. Every action and spell gets an illustrated icon (sometimes over-illustrated! Look at that title screen!). Beasts like the earth warlock, griffons, and dolphins have their own strengths and lovingly detailed graphics that give them unique character. The color-flipping terrain is a huge centerpiece effect that reinforces the importance in this game of the division between the elements; the center of the arena, where Econ stands, brings all four colors together.

The most eye-catching pieces in the game are the tokens, twelve artifacts placed on the edges of the arena based on literal interpretation of the elements, such as a wave for water or an ignited oil lamp for fire. If you collect all three of a god’s tokens, you’ll drain their zone’s power and restrict the movement of their creatures. And if you collect all your own tokens, you get to take on Econ himself.

Players take turns casting spells and moving one creature. If two pieces collide, they fight until only one remains. A few tactics stand out in this simple combat: target the spellcasters quickly if possible to prevent the gods from using spells, and teleport behind a group of enemies to force that player into acting defensively. The major strategic choice involves how much you’re willing to move outside your elemental zone and meet the other gods on their terrain; admittedly, the changing terrain can be difficult to take advantage of, but you can at least remember where your zone generally begins and ends.

The different AI opponent playstyles divide their time between fighting everyone, collecting opponents’ tokens, or collecting their own tokens. You usually juggle those tasks too. Like the elemental terrain, the key is balance. The game wraps you up in a tricky back-and-forth between pushing forward in battle and creeping behind enemy territory to gather tokens.

The big issue is that defeating Econ is rarely worth the effort. Econ is incredibly strong, and by the time you’ve worked through the other gods’ armies to grab your tokens, your ranks will have thinned out enough that you need to commit every last creature to taking down the Elemental Master. If another player decides to fight Econ too, you stand more of a chance, but at that point you may be better served picking off the other weakened player instead. Without the balance of that secondary goal, the race for tokens has much less urgency, and wearing away at other players gets dull after enough turns.

I didn’t finish most rounds of Econ’s Arena. The game runs into the point where flexible goals leave the strategy unfocused and searching for an engaging back half. But I enjoyed what the game seemed to enjoy about itself. On one screen, you can see the status of every piece in the game at once. I want to play an open-ended strategy game starring color-coded centaurs and mermen too!