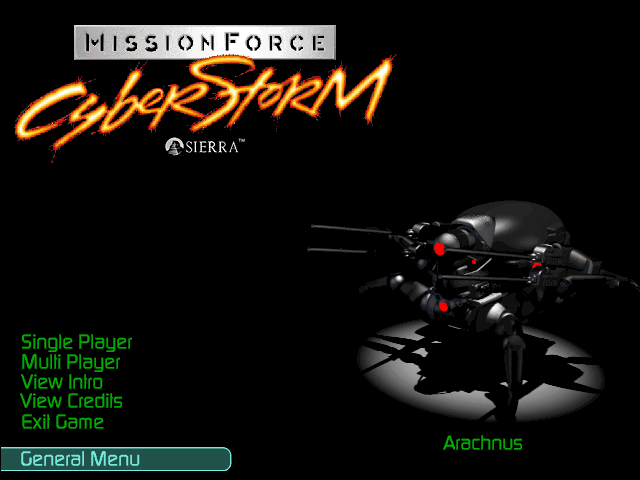 Despite its low profile, MissionForce: CyberStorm is one of the greatest turn-based strategy games of its time, an absolute milestone for the genre. The game creatively plays with genre mechanics, then uses them to demonstrate the dehumanizing effects of technology and war.

CyberStorm is the third game in the Earthsiege franchise, a long-running series of giant-robot games that eventually evolved into Starsiege and the shooter Tribes. Despite its lengthy taproot, CyberStorm stands fairly well by itself. Hundreds of years into the future, humanity wages war against the Cybrids, a race of malicious AI that rebelled against their creators and self-replicated. You play as a freshly recruited ensign at Unitech, a private military contractor that fights these battles on the far reaches of the galaxy. With a meager allowance at first, you will need to use resources requisitioned from the battlefield to beef up your fleet of robots (called HERCs) and take on the Cybrids.

Like many high-intensity strategy games, CyberStorm splits its time between advance planning and mid-battle tactics. 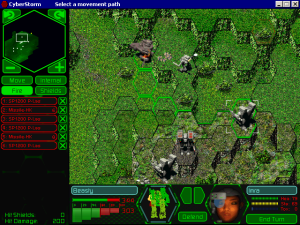 Combat is complicated but rewarding

Before each mission, CyberStorm situates you at the Unitech HERC Base, where you manage your troop. Your HERC machines need constant repairs, as well as upgrades and exchanges for any payload they carry to better suit the next battle. The level of micromanagement is extreme, but excitingly so. Parts can be individually tweaked, exchanged for slightly altered models with different energy efficiency, or wholesale replaced with new weapons or defensive gear. So many possibilities exist for mixing and matching mech types (add a scout? Swap in a heavy?), then further rebalancing their equipment. Think of it like calling formations for a sports team… if the players fired ballistics missiles and were named “Juggernaut.”

Combat is constantly exciting thanks to this depth. Each HERC unit has a finite power supply that limits its actions and weapon uses per turn, forcing you to choose between defensive, evasive, and offensive actions. Almost immediately, squad tactics reveal themselves in these systems, like readjusting the shield strength of a more powerful ranged unit or moving armored but weak scouts ahead to draw fire. Enemy Cybrids worry about these complexities just as you do, and each side needs to refocus continually, shifting from cannons to shield-disabling lasers or close-range combat to distant missile barrages.

Unitech will dispatch you on a handful of different mission types, such as reconnaissance, defense, and general warfare. One mission might intentionally drop you into a hot zone filled with enemies, while another asks you to locate a distant Cybrid base. This offers decent variety, especially given the random setups and atmospheric conditions of planets you might visit. One memorable mission type requires you to bring back ore deposits while defending against waves of enemies; you get credits for any ore recovered. Ingeniously, though, the ore retrieval tools take up a space in each HERC’s inventory, forcing you to balance between armaments and mission-critical supplies. Similar ore opportunities exist on other missions, tempting you to gain extra money while risking your offensive capabilities. This is a clever touch, especially early in the campaign when a smaller army with greater financial need has to put more on the line. 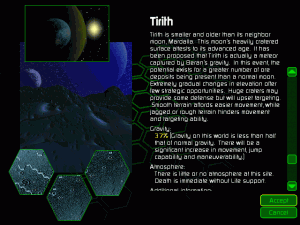 Your mission location can change the combat dynamics

Where CyberStorm gets interesting are the Bioderms, a caste of tube-bred, drone humans who pilot your HERC army. Each Bioderm model has strengths and weaknesses for specifics type of weapons and equipment, which can be retrained to better suit their assigned HERC. You can re-tailor your mechs to better fit your roster of pilots, while sometimes you might spend a little extra money on a Bioderm with a specific strong trait that your fleet needs. Should they falter in battle, you can inject nerve toxins into their system that boost their performance and health at the risk of destabilizing them. Most Bioderms decay after a set number of missions, making them commodities that need to be pushed close to death as often as possible – especially the unique, extra-strength models that Unitech periodically awards you for good performance.

The possibilities in all these elements are tantalizing. CyberStorm expects you explore them all and allows little room for second chances. When a unit dies, that HERC and Bioderm are dead forever, and your investments go with them. This is as expensive as it is frequent. An oversight like a misplaced shield or a poorly applied stimpack will open the door to a cascading, team-wide failure. The stakes are high, so serious planning matters. (To rub this in, each time a Bioderm kicks the bucket, CyberStorm treats you to a video of them violently decaying into a mess of bones and genetic goo. It’s alternately frightening and hilarious.) You can play smart and safe; the challenge is keeping tabs on the game’s many systems and resisting the temptation to try something wild.

Honestly, the total number of elements at play in the game tends to obscure the strategic depth. With so much at stake in each move, so many moving parts to track, and dozens of variables threatening to upset the balance of the battlefield, I frequently forgot the broad strokes of strategy and focused too much on the little details. 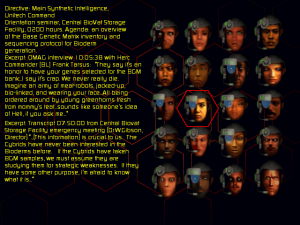 But apart from offering another layer of strategy, the expendable Bioderms raise a nagging question about the cost of Unitech’s war. The best battle plan involves torturing and poisoning your pilots, bred in a vat with the expectation of dying quickly. You form personal attachments to your Bioderms at first and mourn when then they die, but to excel, you need to cut the sentimentality and start shooting them up with drugs. CyberStorm‘s strategy encourages you to treat living creatures as assets rather than people, and as your success leads you up the military hierarchy, Unitech’s operation becomes increasingly clearly a product of this amoral thinking.

Between missions, CyberStorm uses found-footage and documentary techniques like training videos and conversation transcripts to reveal the cold heart behind the HERC Base. As it turns out, Bioderms can think and act on their own and are not simply brainless puppets; Unitech is governed by an AI as ruthless as the Cybrids; and most troublingly, those specially awarded Bioderms are slaves cloned from the genes of previous commanders. The game then juxtaposes the soullessness underwriting Unitech against the top brass’s celebration of increasingly stronger and more expensive HERCs models. In a shocking downer of an ending, Unitech rewards your hand in defeating the Cybrids by extracting your genes as well, turning you into another abuseable face in their war chest.

No one can escape the perpetual war machine. Expendable treatment of life begets further mistreatment and the gradual supplanting of human decency by profiteering and self-justification. CyberStorm tells that cynical message through both its strategy and its writing, which is an enormous triumph.

For those who enjoy these strategy on its own strengths, CyberStorm also includes multiplayer support. Your team from the campaign can carry over to the multiplayer component, which can be played on a single computer, live over the Internet, or even though email. Each player’s HERCs receive a force rating, allowing you to reconfigure armies to ensure at least a comparative match. The game even supports a pseudo-cooperative mode with the option to include random Cybrid enemies in your battle; played along, this can act as a training mode. For a 1996 strategy game, all this is really impressive and extends the game’s appeal beyond its hefty campaign.

MissionForce: CyberStorm is an astounding accomplishment. The game sucks you in with its deep, wildly fun strategy, then uses those mechanics to plants themes of utilitarian cruelty that resonate through the narrative. It takes your engagement with its exciting giant robot combat into unflinchingly dark territory and succeeds on every front.