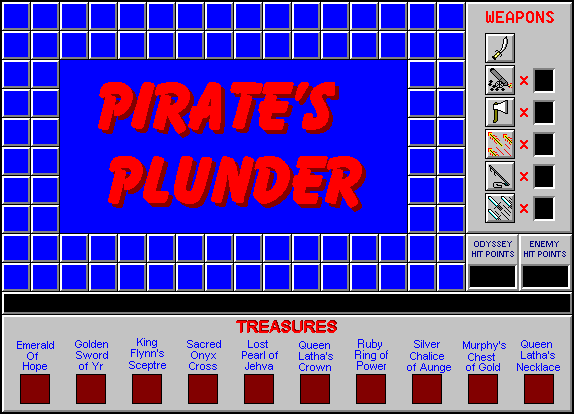 Pirate’s Plunder is a high-seas adventure for people who’d rather play Minesweeper. It fits a whole swashbuckling caper – buried treasure, ghost ships, desert islands, deadly whirlpools – into a bite-size digital board game you could play on your break at work. In fact, the developer called it a “coffee break game.”1

It belongs to a specific style of computer game development from the 90s, short-time-fillers, distributed for free as shareware, designed to be played on what were often, at the time, people’s work computers. Shareware games like these would be created by small teams, usually one or two people, and that was the case with Pirate’s Plunder as well. It was part of a collection of tiny treasure-hunting games by Dexterity Software called the Fortune Pack,2 and for Pirate’s Plunder designer Erin Pavlina, it was actually her first time designing a game.

Dexterity Software was founded by Erin’s partner at the time, Steve Pavlina. Steve had studied to be a software developer, and he later served as the president of the Association of Shareware Professionals.3 But for Erin, game development was a new experience.

It was one in a long string of new experiences. She had graduated college with a degree in psychology, but realizing she didn’t want to be a therapist, she went back to school to follow her interest in physics instead. She joined a master’s degree program in human-factors engineering, a field that combined physics and psychology, with the goal of working for NASA to help acclimate astronauts to spaceflight. But when life’s circumstances changed her plans, Erin ended up “adrift,” as she described it. She worked as a receptionist; she wrote a paranormal young adult novel; and eventually, she went to work for Steve’s software company as a game designer.4,5

That sounds like a dramatic change in career path. As Erin remembers it, her wide variety of work experiences and education were what helped her make the transition. “Part of human factors engineering involves user interface design and usability testing,” she told me via email. “We were taught how to design an interface to be functional as well as intuitive for the human.”6

This ended up being a cornerstone of Erin’s work on the Fortune Pack games: they had to be easy to play. 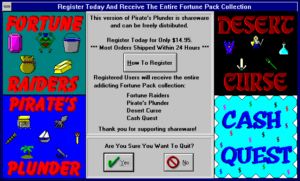 Fortune Raiders and Pirate’s Plunder were free. Desert Curse and Cash Quest would cost you $14.95

Erin said she wanted to design games for people like herself, who needed a quick break from their work but might not want to get invested in a computer game. “We knew there was a market of casual game players who liked to play card games or casino games online,” she said. “I tried to design a game I would want to play, assuming other people in my demographic would find it fun to play as well.” Erin and Steve made a list of goals they wanted their games to accomplish: they had to be short, they had to be quick to learn, and they had to involve “little to no strategy, based more on luck.”6

To meet those goals, Erin got to draw on her work with user engineering. During development, she would run usability tests, something that other small shareware developers probably didn’t have the luxury or means to do. She wanted to ensure the game was intuitive – which it is! The other challenge of testing, though, was to figure out how to make a game with “little to no strategy” still be engaging to play. “I had to balance the difficulty level very carefully,” she acknowledged. The games needed to be easy, but not so easy that people would lose interest. “I designed the games so that a player would win 70% of the time, generally speaking,” she said.6

On top of becoming a game designer for the first time, Erin also composed the music, not just for the Fortune Pack but for other games by Dexterity Software too. And again, she was able to take inspiration from something else in her life. Erin says her mother taught her piano when she was young and even encouraged her to write her own music. “By the time I was 20 years old I had quite a bit of music composed, mainly just for myself and my family to enjoy,” she said. But turning that into her job? “I never imagined I’d write video game music,” she admitted, “but it was a fun challenge.”6

It’s a testament to Erin’s rich and varied experience that she could move comfortably from writing a novel into being a first-time game developer. Maybe that speaks to the wide range of skills necessary in game development, but it also says a lot, in general, about the importance of living a full life. 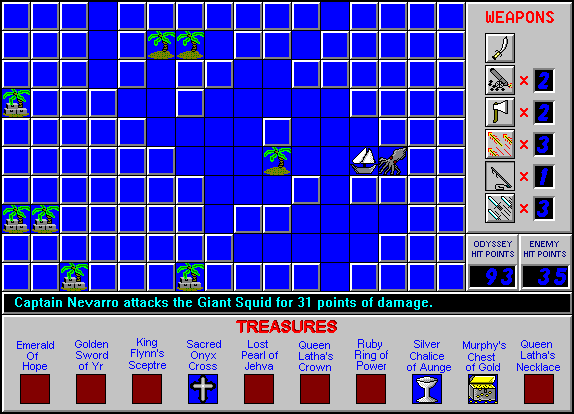 Pirate’s Plunder is exactly the sort of pirate adventure that Erin designed it to be, one where you’re at the mercy of the seas.

There are 10 treasures hidden somewhere to discover. As you move around your pirate ship, you flip over each space on the board to reveal what’s underneath. Maybe you’ll find one of the treasures, like the Emerald of Hope. More often, you’ll end up in a fight with another pirate ship or a terrible sea monster.

There’s a lot of guesswork involved in Pirate’s Plunder. You start with a blank map, and in theory, every space could be dangerous. No first move is a good option. Once you’ve made a little headway – and hopefully not after being torn up by a ghost ship – you’ll start to find clues that reveal the locations of traps and treasures. It’s not deduction so much as it is about managing the odds, guessing the safest path through the waters without ramming into an iceberg along the way. 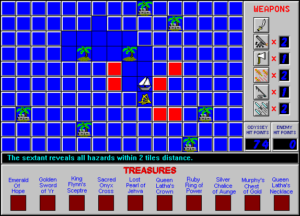 Tools like the sextant and the spyglass help you spot hazards in the water, but you can never completely protect your ship

The main thing you have control over is your resources, in particular how you use the limited weapons on your ship. Obviously harpoons won’t do any good against pirate ships, but you also need to conserve your cannonballs for the biggest, baddest enemies. If you need to restock supplies or repair your ship, you could scavenge one of the islands on the map, but there are only so many islands to pilfer from before you’ve ransacked the entire sea.

As the end of the game nears – as your supplies run thin and the clues run dry, and there’s only a scant few spaces left to explore – it comes down to luck. It feels, appropriately, like the end of a board game, when the tension peaks as you draw the next card from the deck and you curse the fact that the entire outcome rests on this random event. I found the odds of winning Pirate’s Plunder were much lower than the 70% that Dexterity Software had set out for, but at least if you lose, there’s plenty of time left to play it again before your coffee break is over.

That was how these small shareware games from this era were meant to be played, something like a precursor to the role that mobile games fill today. Just like that specific mode of consuming games has ended, so has the model of the entrepreneurial shareware company.

Dexterity Software shut down in 2006. Erin and Steve have since separated and have both left the software industry, taking their self-driven energy elsewhere. After years of writing motivational articles about game development, Steve abruptly quit the software business, shut down his message forum for software developers, and fully switched over to becoming a self-help author.7,8,9 Meanwhile, Erin went into an entirely different field again, but another one that built on her past experiences, this time with psychology and writing about the paranormal: today she’s a psychic in Las Vegas.10

Erin’s contributions to Dexterity Software and her work on the Fortune Pack series are a small piece of shareware history, and it’s worth recognizing those experiences in game development – not just the people who made it their calling, but people whose game design career was just a step in their life story.

Erin says her daughter has been playing the piano now too,6 and she’s taught her how to play the music that she once wrote for computer games.