Battle of the Eras 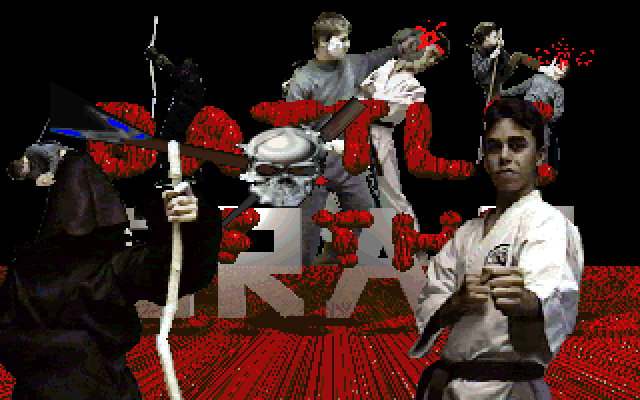 When I was a teenager, I loved the idea of making things. My brother and friends and I would spend hours dreaming up movies, or video games, or music projects, none of which would come to fruition. We had no resources or follow-through. Anything we completed was lovingly cobbled together from whatever household objects we had lying around, but usually, our projects wouldn’t make it past the first draft of the script, or we’d only make a title screen, and that was good enough for us. We were satisfied with the knowledge that, if we applied ourselves, maybe we could really make something.

I like to think that everyone flirted with an impractical creative dream at one point when they were kids. Maybe you did too. That’s why Battle of the Eras, a homemade live-action fighting game from 1995, is so enjoyable. It was made by a bunch of teenagers in their basement with big ideas and no budget, except they actually did it. 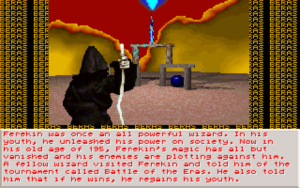 Each character has a long-winded reason for entering the tournament, which I will not attempt to explain here

The creators of Battle of the Eras were only 14 years old — fourteen! — when they started working on their game. According to the only interview with Joseph Mocanu, the programmer for Battle of the Eras, they were a group of nerdy friends from Ontario who met in high school, whose skills didn’t necessarily match what was needed to produce a video game, but they went for it anyway.

Joseph was the only one who could program and compose music, while everyone else tackled some degree of art, audio, or design. The live-action footage was filmed in their friend Mark’s basement in front of a green screen, but due to the limited video equipment on-hand, they had to manually crop out the character graphics, a process that Mocanu described as “brutal.” Despite being an enormous undertaking for a bunch of high-schoolers, it’s hard to imagine that it wasn’t also a lot of fun. “I recall a lot of people were wondering what we were up to,” Mocanu explained, “and I’m sure Mark’s parents thought we were pretty weird kids.”

Up until 2013, the only surviving piece of Battle of the Eras was a demo version floating around the internet, featuring only two of the game’s playable characters. Allegedly, Battle of the Eras sold zero copies, which is why nobody had seen the complete game up to that point. That’s when Brandon Cobb, a self-described “guy with apparently way too much free time on his hands,” tracked down and spoke with Mocanu (an interview that this article is indebted to), and as a bonus, the developer was able to dig up the full version of the game.

Last weekend, I got together with Kevin Bunch, long-time fighting game community member and author of Atari Archive, to try the game out with another person. And it was so much more than we expected. 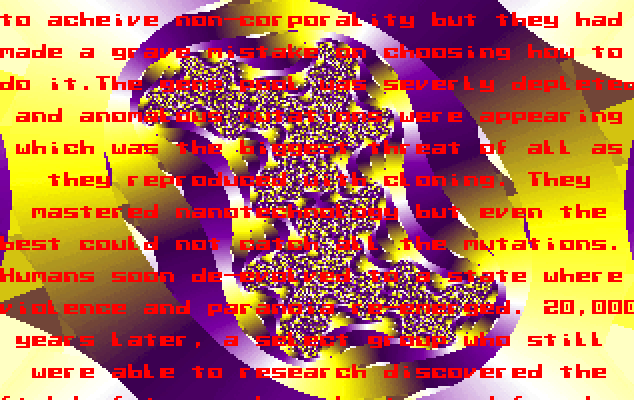 The manual for Battle of the Eras brags that “It has a plot!!! And a complicated one!!”

When you launch Battle of the Eras, it warns you: “If you are an adult and you are weak hearted please delete this game.” We bravely continued.

It opens with a breathless, incomprehensible backstory, which scrolls across the screen way too quickly to read. As far as we could follow along, Battle of the Eras takes place in the year 80,000 AD in a midst of a massive, time-traveling martial arts tournament. There’s also genetic engineering involved in this somehow, and there’s a mysterious gateway between dimensions called The Dome. It’s a lot to take in, and it’s all irrelevant, but it perfectly sets the tone for what follows.

You can pick from five characters, all of whom are clearly kids wearing homemade costumes. The obvious highlight is XLX-2250, an “escaped prototype for a cybernetic human” who’s just a kid in a grey sweatsuit, holding a Super Soaker, with a hose tied to his back that’s supposed to be a jetpack. ShadowSnake, “a dark half-elf originating in the 8th century,” was played by a developer’s little brother who Mocanu says they had to babysit during the production, which explains why he’s a full foot shorter than the rest of the cast. Every character gets a lengthy backstory. Everyone is wearing socks, probably because shoes weren’t allowed on inside the house. 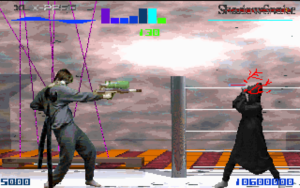 From our brief time playing Battle of the Eras, it’s safe to say the game is sort of a trainwreck. But every problem with Battle of the Eras is understandable from the perspective of a group of teenagers with no experience in game design.

Most of the special moves, for example, have button inputs that are so complicated and require such precise timing that we concluded there’s no way a human could execute them. I can imagine exactly how the developers ended up there. If the moves are super hard to input, that must mean this is a really advanced fighting game, right? That’s how I thought fighting games worked when I was a kid too!

The game proudly wears its thrown-together production on its sleeve, like in the battle against the first boss character, the Minotaur. According to Mocanu, the team realized too late into development that they wouldn’t be able to properly animate the droopy clay Minotaur figurine they had sculpted, so they hastily improvised a backup option: as soon as the battle begins, the Minotaur’s chest bursts open to reveal a worm creature, who you proceed to fight against instead.

(As an added quirk, Mocanu’s copy of Battle of the Eras had been sitting around on floppy disks for 18 years, leading to some mild data corruption. Sometimes the character graphics will glitch out in the middle of an attack, or the menu system will break, and it’s hard to tell if these were part of the original game or a data recovery issue. Either way, it adds to the feeling that you’re playing something slightly dangerous that’s barely held together, like riding an old wooden roller coaster.) 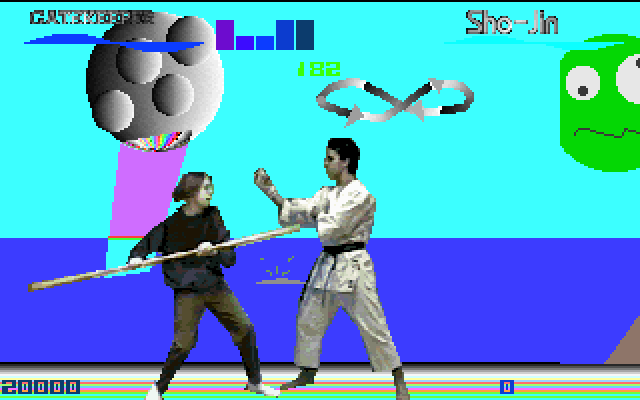 In a game chocked full of lore, there’s no information about this nonsensical stage only known as “UNKNOWN PLACE IN AN UNKNOWN TIME”

So forget about playing it like a normal fighting game. The real fun of Battle of the Eras is getting to watch these kids try to make their own Mortal Kombat at home. For anyone who once had a childhood passion project they never realized, there’s a vicarious thrill to watching a bunch of high-schoolers actually follow through on their crazy, half-baked ideas. Kevin and I kept going back to try every character and every stage, just to see what the hell they would do next.

The fact that they did it at all is impressive. It’s certainly more than my friends and I were able to make when we were 14 years old. Can you imagine the commitment this took?

The best comparison I can draw to Battle of the Eras is Raiders of the Lost Ark: The Adaptation, a now-legendary fan recreation of the first Indiana Jones movie, filmed by a bunch of teenagers in the 1980s on a shoestring budget. Watching clips from The Adaptation, it’s delightful, not because it’s a stunning movie on Hollywood terms, but because you want to root for the kids coming up with crafty ways to restage the most elaborate and perilous scenes from their favorite movie.

Battle of the Eras comes across the same way. It’s not that any of this is good — Mocanu said in his interview that even he wasn’t happy with the finished game — but when you meet the Gatekeeper, a character who appears to be fighting with a broomstick, you might recognize a piece of yourself in these kids, doing the best they could with what they had.