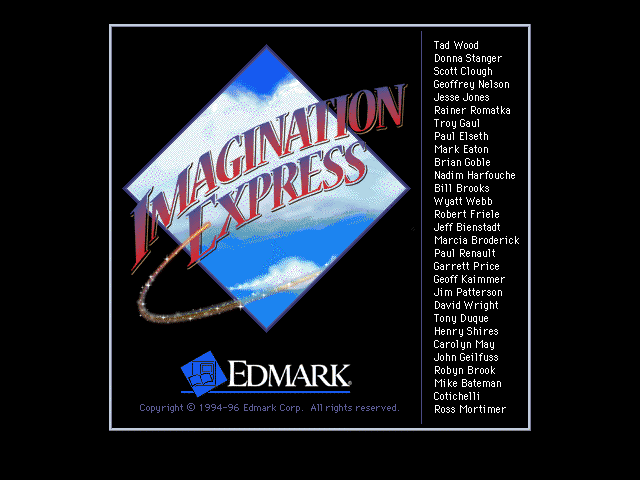 Where can your imagination take you? You could travel to ancient Egypt or the bottom of the ocean. Or just to your backyard.

Edmark’s Imagination Express is storytelling software, a program to help children develop their language skills by writing stories and bringing them to life with pictures. Compared with other story-writing software like MECC’s Storybook Weaver, which lets kids mix and match characters, backgrounds, and sound effects in wacky combinations, Imagination Express puts more emphasis on the setting.

The program was divided up into six different themed “destinations,” each sold separately. But rather than going to faraway imaginary lands, as you might expect from the title, these destinations are based the real world, either from history of the present day, like a South American rainforest or a Medieval castle. That’s because Imagination Express has a double educational mission – to use creative writing as a way to teach children about different parts of the world.

Of course, you can have a great time avoiding learning anything too.

The hub for Imagination Express looks like a futuristic ship, flying through the clouds on the way to your imagination destination. It’s probably not a coincidence that it looks like the Ship of the Imagination from Carl Sagan’s Cosmos. After all, you’re embarking on an adventure of sorts! Most of the program’s destinations come with a Fact Book that explains the background of each setting, and although that’s optional reading, it’s the inspiration for the characters and scenes you can use in your stories. So in Destination: Ocean, the featured players are marine biologists, not mermaids.

(Okay, and there’s one sea serpent. You can still let your imagination run wild, just in a realer place. The sample story in Destination: Neighborhood is about a cat throwing a house party.) 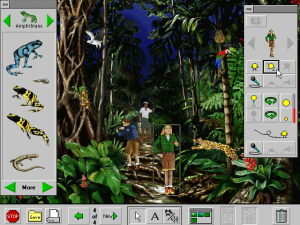 People, places, and things bring your story to life

Imagination Express treats the destinations like they’re believable places, and that’s true when you’re making your own stories too. The storytelling scenes aren’t simply flat backdrops to put characters on top of. They have interactive visual depth. People, props, and animals that are placed in the scene will shrink or grow depending on how far away they are, and they can be hidden behind walls and windows. I loved scenes like the dungeon in Destination: Castle, for example, where you can put a knight behind bars. If you wanted to stuff the king inside the oven in the castle kitchen, instead of a pie like you’re supposed to, that’s a little weird, but sure, it’ll allow that.

Almost every destination creates a fun storytelling opportunity. And their casts are prominently diverse, always including a few children as well so that kids have someone they can relate to, even in a story about marine biologists. The only misfire in the bunch is Destination: Neighborhood; despite a theme that kids can related to on a more personal level, it’s the only one with live-action graphics, which are significantly more awkward than the illustrations in the rest of the program. 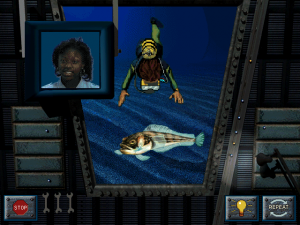 Need a story idea? Ask a kid for advice

The later entries in the series found ways to integrate educational themes more directly into the settings themselves. Destination: Pyramids combines ancient Egyptian cities with elements of modern archaeology. The most ambitious theme, Destination: Time Trip USA, traces an American town across hundreds of years, and the parent’s guide talks about the benefits of teaching American history through the lens of ordinary people’s experiences. Settings like those can inspire stories as much as a writing prompt can.

But let’s be honest: kids would not have cared about that. The social studies and science facts might appeal kids who love learning, but the Fact Books may as well be kept in a separate program. As thoughtfully crafted and integrated as the educational content is, you can easily ignore most of it. It’s much more fun to get weird with it.

Open-ended creativity software is a license to be silly. Because Imagination Express is so grounded – so firmly rooted in the plausibility of its settings, and with such detailed, multi-layered scenery – that makes it even better to rebel against. Themes like Destination: Neighborhood try so hard to set up everyday situations that kids can relate to, which means they’re perfect for telling stories about an army of giant dogs taking over the city instead. 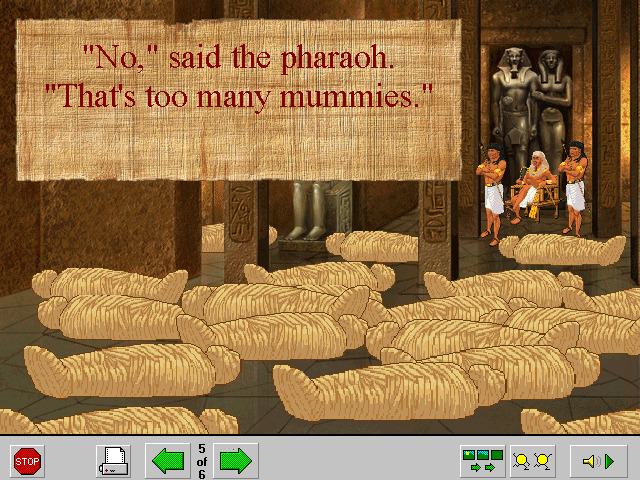 The other tools in Imagination Express, like music and animations, are much better suited for this sort of weirdass chaos than they are for the more responsible, well-informed stories that the program encourages you to write. What’s the point of a children’s creativity toolbox if not unleashing weirdass chaos? The earnestness of Imagination Express makes the perfect foil.

In an interactive message for parents included with Imagination Express, Edmark executive producer and former teacher Donna Stanger explains that the point of the different destinations is to stimulate kids, inspiring them to write more often and develop their writing skills. If creative anarchy in a learning environment could get kids to write too, I think that’s still a success.