In Wrath of the Gods, developed Joel Skidmore and the small team at Luminaria compellingly attempt to cram the entirety of the Greek myths into a digestible, entertaining, and educational format. In terms of raw effort, it’s hard to top.

Wrath of the Gods is a third-person adventure game that tries to incorporate every last Greek legend, scene, and character into the story. In a nod to the famous tragic character Oedipus, you play as the heir to a throne, abandoned by the king after the Oracle predicted you would replace him. After a childhood raised by a centaur, you set across Ancient Greece in search of adventure.

What follows is the mythological mashup. By the end of the game, you will have killed Medusa, slayed the Minotaur, flown in Hermes’s sandals, gained the Midas touch, stolen the Graeae’s eye, found the Golden Fleece, resisted the Sirens, climbed Mount Olympus, met Zeus, outwitted the cyclops, tamed Pegasus, played flute with Pan, and traveled both ways across the river Styx. Jason and Theseus ought to be humbled. 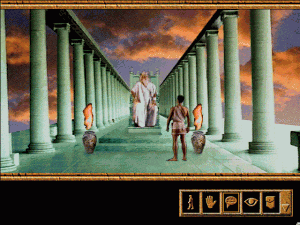 Zeus was enjoying his nap until you got here

That’s wildly untrue to the Greek myths, but it’s in the name of covering as much of them as possible. The game teaches you how the myths unfolded by placing you inside them and asking you to find a solution to whatever trouble awaits. In each scene, you can press a button that provides a detailed background and history of each scene and its place in the Greek pantheon, and you use that information to resolve the situation. Considering that Wrath of the Gods could have presented these challenges as quizzes or more directly teachable content like other edutainment games, the game deserves serious credit for integrating player actions into the stories.

The solutions call on a variety of actions to complete, usually either requiring a choice based on knowledge about the myths or choosing the right inventory items that the scene requires. This plays unimaginatively at times but adapts well for the wide variety of parables. Many require repetitive actions, though, that never clearly demonstrate progress thanks to the canned animations and dialogue. (Combat scenarios especially ask you to repeat actions with no apparent change.) Luckily, if you can’t figure something out immediately, you can keep moving along; the game’s Greece is massive and interconnected, which encourages you to poke around until you find a myth that clicks. And rather than inflicting death, wrong solutions cleverly send the player to Hades, where an additional set of educational puzzles leads to the exit. To the game’s benefit, these twists let players solve sections non-linearly and possibly avoid some unwanted parts altogether, but the convoluted layout reads as cluttered more than dense and makes losing track easier than desirable.

In an interesting aesthetic choice, Wrath of the Gods opts for realistic visuals over illustrations whenever possible. Each scene uses photos of the Greek countryside, even if that means showing ruins (the game acknowledges that anachronism. Greece always looked like that, right?). The effect is oddly authentic. 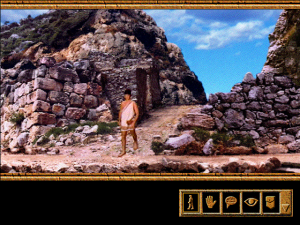 Photos of Greece are convincingly “there,” even if they don’t fit the time period

The same philosophy applies to the characters, who are represented by live-action actors with frizzy 80s hair in flamboyant costumes. It doesn’t work quite as convincingly. Much of the acting is embarrassingly overwrought or too enthusiastic. Clips of dialogue are stitched together with limited animation and snappy cuts to save memory, and the results look closer to one of Terry Gilliam’s Python animations than a movie. It’s jarringly weird, but the game seems to realize this and doubles down on the anachronisms and cheese. The countryside, for instance, has several “airports” with slots machines and dragons that make jet engine noises. No scene escapes unpunctuated by slide whistles or weird Mr. Bean-esque physical comedy grunts. It all becomes charming after a while, and the game manages to turn its most glaring weak point into part of its appeal.

And for whatever reason, it works towards the educational mission. In a particularly memorable scene, the bandit Sciron orders you to wash his feet then kicks you off a cliff. This moment is almost objectively awful and has some of the game’s worst-incorporated live action, and maybe because of that, I wanted to know more about who Sciron was afterwards. Sure enough, he’s a figure from Greek mythology who kicked people off cliffs. The game piqued my curiosity. This is only one several dozen scenes with a similar effect.

Wrath of the Gods earns respect for its effort and breadth. The game educates about Greek mythology by putting you directly in the action, even if or possibly because its aesthetics feel off. The occasional self-deprecation about its cheesiness lets it stand out among other games that flounder in that department.