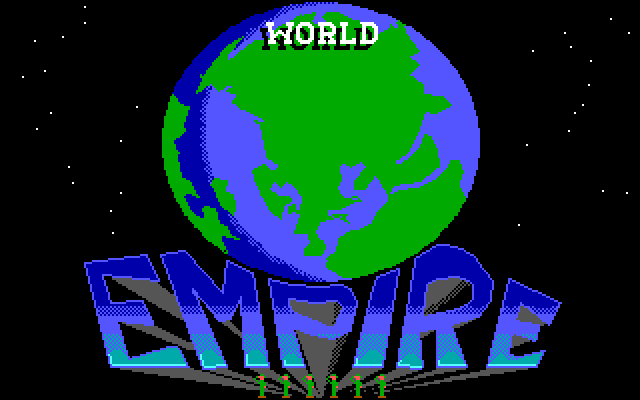 With a dash of geopolitical uncertainty, World Empire sits between simple war board games and full-scale simulations. The games never tax you with the realistic management of a massive army, but by destabilizing the world a little, they force you to play with one eye on what happens behind your own borders.

The five World Empire games play nearly identically apart from some revisions, and as such, I’ve chosen to look at them as a unit. Their similarity also allows a rare chance to see a game’s presentation keep pace with trends across twelve years of development. 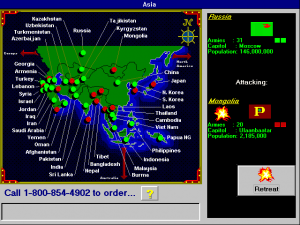 The World Empire games closely mimic the playstyle of Risk: you control a military that spreads across the globe and strikes occupied enemy territories until one army remains. Each turn, players shuffle their units across discrete regions on a world map; troops can fight other countries or fortify strategically important areas from attack. Some rules received notable minor tweaks, like simplifying combat to a series of coin flips until one country’s soldiers are wiped out, but the basic setup should be familiar to anyone who has played the classic board game.

The formula steps forward with World Empire‘s addition of ideologies, an underlying characteristic of the world that encourages standoffs and high turnover. Each player campaigns for a political belief system – like militarism, socialism, or populism (which aren’t opposing concepts, but whatever) – for which each country holds different sympathies. If your ideologies align, military takeover is simple. If they don’t, you need to leave a certain number of troops in that country to prevent a coup.

This dramatically changes the games’ strategy. You can’t spread your army thinly across a continent to cover ground and only defend the choke points. Ideological differences force you to keep soldiers back to maintain your empire. Big territories like China help you gain troops more quickly, but they require a greater commitment to control if your politics don’t align. Belief systems seem to be assigned evenly and randomly, which makes skirmishes between neighboring countries with small armies more liable to end in failure for both sides. The world feels excitingly volatile in a manageable way.

The extra layer enhances World Empire, not just by adding a wrinkle to the gameplay but by reminding you of the practical side of taking over the world. Keeping the lid on rebellion through force underscores that you’re controlling people – not countries – who will reject unjust power if they can. To drive the real-life parallels further, World Empire II and onward include an alternate mode that adjusts country sizes and production rates to mimic real-world development levels. It skews the game, but then again, that accurately reflects actual international power imbalances.

This gameplay stayed relatively consistent over the course of the World Empire series. Systems saw primarily minor adjustments, like how ideology affects combat. The fourth edition altered the most by adding risky, long-range air and sea strikes that require a large troop commitment. Because the series’s appearance changed more than its rules, the five versions of the game reflect the evolution of software through the 1990s. The first World Empire game is a little rougher and sillier; everything looks more like cartoon, and the keyboard-only interface hides loads of information behind menus for practical reasons. Later entries gradually sanded the edges, starting with much-needed mouse controls and eventually by taking advantage of higher screen resolutions to display more information and actions at once.

Watching an otherwise stable series hone a new personality is an eye-opening, bittersweet experience. By the game’s fourth and fifth installments, photographs replaced drawn maps and character portraits, signaling the demand for multimedia. The opening guitar solo music and animated battle sequences from the first World Empire add flair to that game, but they understandably needed an update for whatever the contemporary style was.

That World Empire never majorly changed after a decade testifies to the strength of its ideology hook. Though the occasional turmoil doesn’t reinvent the war game genre, it reminds you about the implications of global domination. The most surprising reinvention is the series itself: an occasional refresh helped the same game stay current for years.