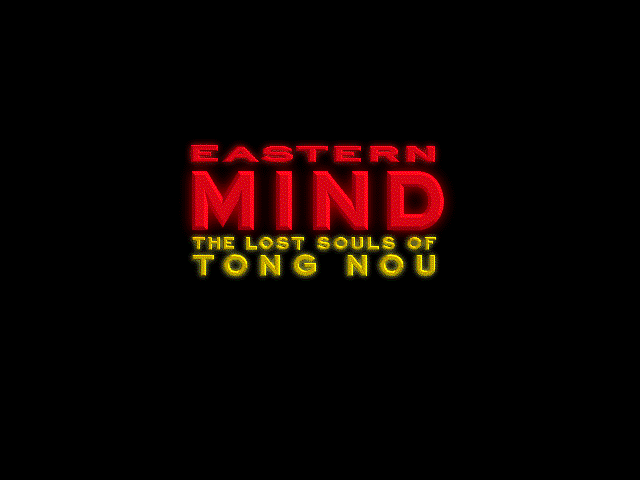 The first time I played Eastern Mind: The Lost Souls of Tong Nou, I mistook it for a fever dream for nearly a decade afterward.

Eastern Mind is, unquestionably, one of the most surreal games of its time. It’s also deeply spiritual. It ruminates on the purpose of the soul while jumping erratically from moment to moment. It defies an easy explanation, but the longer you spend time with it, the more you can come to understand its rhythm, its purpose to help you understand your soul.

Eastern Mind comes from Osamu Sato, a Japanese digital artist who attracted the attention of Sony Imagesoft after some critical acclaim for his music and video work. Sato is perhaps most recognizable for his work on LSD: Dream Emulator, a game about exploring strange dreamlike landscapes; Eastern Mind was his first virtual dreamland, and it’s more like folklore, a story that helps up explain ourselves. 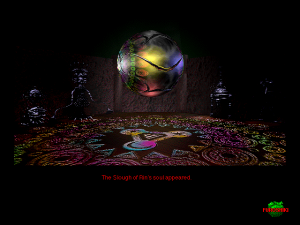 The mystery of Rin’s soul awaits at the Central Mountain

Sato seems to have had great creative control over Eastern Mind, and its themes are appropriately personal. You play as Rin, a man whose spirit is taken by the soul-swallowing island of Tong-Nou. Seeking to restore himself, Rin borrows a soul for 49 days, and he takes a trip far to the east to save his soul. As you pass over the horizon, the island Tong-Nou is revealed to be Osamu Sato’s massive, green head floating in space. To enter the island, you have to climb into his head. This is a game about exploring yourself, literally.

Rin can accomplish little at first, let alone enter the mountain where the kings of Tong-Nou have trapped his soul. To advance, he must die and descend into the Tree of Life. From within the roots, he can “transmigrate” into nine other lives from the four worlds of Tong-Nou: time, life, dreaming, and desire. Each life represents a different part of Rin that he must experience and learn from. Through these lives, Rin must collect the five elemental magatamas that contain his soul and, essentially, rebuild himself. Death is frequent and not only not penalized but encouraged; in keeping with the Eastern spiritual theme, death represents a new beginning and lets you reselect whichever life you want.

As befits a self-guided journey of the soul, Eastern Mind is a non-linear experience. Each of Rin’s nine lives carries a different objective which, while ostensibly based in a specific part of Tong-Nou, takes you on a whirlwind tour of the island. As long as you complete all nine at some point, you can follow whatever meandering path through the hub world that you want. At least half of the game’s content is optional, so you can pick and choose what you do to finish each life. To get a gudebook to the island, for example, you can either find it in a chest or trade for it with an amulet you brought on your journey. Or you can use that amulet to save yourself from death. 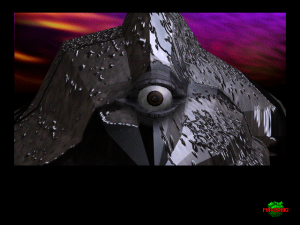 You can trade items at the Phantom Marketplace, marked by these eyeball mountains

The freeform structure is refreshing and thematically appropriate; this is your journey of spiritual restoration, and plot events unfold whenever you get around to them. One of Rin’s lives requires an item called the Eyeball of Dreaming, and you can get it from the King of Life whenever you happen run across him in the forest.

Of course, the next step is to trick the King of Life by throwing an ant at him and making him sneeze. Then you can climb into his mouth, where a second smaller version of the King of Life waits inside to test your knowledge about the island. For every creative flourish Eastern Mind makes, there’s always a few extra parts of weirdness too.

Consider the golden Helix Palace hidden in the Land of Desire, a scene emblematic of the game’s surreal expression of spirituality. The palace indulges in sins and vices to fatal extremes, such as force-feeding you gourmet food until you explode. One of these sins is, oddly enough, eternal life. In the Room of Immortality, a creature that resembles the moon will either kill you or bless you with the infinite “life of gold.” If you’re granted the power to live forever, you’re treated to an inescapable, rapid-fire slideshow of every scene in the game, repeating endlessly. In Eastern Mind, death gives your life meaning. The only way to lose is to live forever. 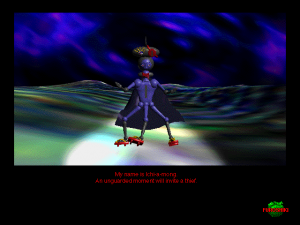 Meet colorful characters like Ichi-a-mong, then never see them again

This isn’t randomness for its own sake. This game is a Zen parable about balance in life, finding your purpose, and discovering yourself. Rin needs to recover his soul, of course, but the adventure also helps him remember to use his time alive meaningfully.

Osamu Sato followed that path but took a detour deep through his mind, literally and figuratively. The otherwise coherent philosophical underpinnings only draw attention to how strange it can be. Eastern Mind frequently feels like it works on a different wavelength, making in-jokes and references we’re not a part of. A few details I couldn’t find anywhere else to mention: 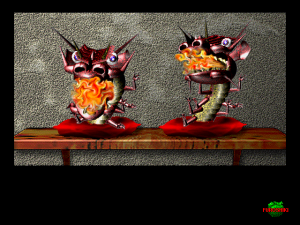 These dragons can’t hurt you, but they leave behind a flower if you blow them up

The game’s chaotic internal logic follows its own rhythm with distressing consistency. So what if there’s a mysterious, bronze-colored creature that says “Fun!” repeatedly and runs across the screen? Eastern Mind doesn’t need to explain him; it’s all there in the guidebook. Can’t figure out the puzzle with the giant computer in the “Fire-Tower of Time Tong-tah”? It’ll make sense eventually. You’re just along for an ambling tour through the island of Tong-Nou and, by extension, Osamu Sato’s imagination. He threw every ounce of his creativity into this one, from the violently energetic music to the bedazzled-Jello character design.

As the ending explains, Tong-Nou is not an island that devours souls but rather purifies them. A visit to Tong-Nou is a time for relaxation, for learning, and for understanding. Eastern Mind presents just such a voyage: its interlocking, allegorical world offers an eye-opening (if disorienting) change of pace – and a unique perspective on life and what defines success.

Osamu Sato also designed a sequel to Eastern Mind titled 中天 (“Chuten”). The game was only released in Japan, and only for Macintosh. It is an insane rarity and has only been spotted for sale on the Internet once or twice ever. Based on a brief email correspondence I had with Osamu Sato, even he doesn’t know of any available copies (the rough translation is his):

It has already become the discontinuance of making.
i think it is difficulty with acquisition in Japan.

May be you will check Japanese auction sites diligently!

To my knowledge, there is no record of anyone having ever played this game. The only pictures of Chuten are available from the official website for OutSide Directors, Osamu Sato’s company that developed both games. For convenience, they’re assembled here.

UPDATE: It’s been found! And officially, it’s titled Chu-Teng. And it was released for Windows too!

[This article originally speculated that Eastern Mind was planned to be released on the PlayStation. This was conjecture based on a Sony promotional reel. This was inaccurate speculation, and Osamu Sato confirmed that only Mac and Windows versions were developed. Thanks to ace for the heads-up.]